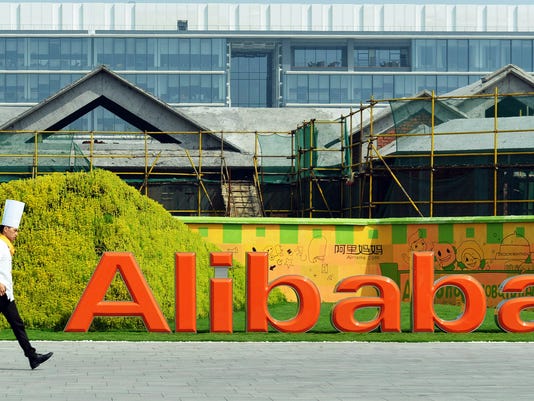 A chef walks into the headquarters campus of Alibaba Group in Hangzhou, China. The e-commerce company holds its IPO today.(Photo: AP)

New York – — Amazon and eBay should watch their backs.

As Chinese e-commerce powerhouse Alibaba readies what could be the biggest initial public offering ever with it begins trading Friday on the New York Stock Exchange, it is quietly hinting at plans to expand into the U.S. The company controls nearly 80 percent of all e-commerce in China, and founder and chairman Jack Ma has ambitions that go beyond the country’s borders.

Earlier this week, at a Hong Kong stop on Alibaba’s global tour to meet with potential investors, Ma surprised a pack of reporters, camped out in the lobby of the Ritz-Carlton hotel in Kowloon, with the clearest indication yet of his vision for growth.

“Speaking for Alibaba, we hope to become a global company, so after we go public in the U.S., we will expand strongly in Europe and America,” he said. “At the same time we won’t abandon Asia, because after all we’re not a company from China, we are an Internet company that happens to be in China.”

Potential investors are enticed by Alibaba’s surging growth. Its revenue jumped 46 percent, to $2.54 billion, during the quarter that ended in June. And in the three month period before that, the company’s revenue surged 39 percent, posting its slowest rate in six years. The immense investor interest could result in the initial public offering raising more than $24 billion, making it the biggest ever.

Alibaba’s formula for success in China is relatively simple: It offers services to sellers and buyers who are part of a growing middle class and serves big cities as well as remote regions, where people don’t have access to many brick-and-mortar retail stores.

The company operates two e-commerce platforms in China, Tmall and Taobao. It also runs its first site, Alibaba.com, a wholesale venue that functions similar to eBay in that it provides an online ecosystem for third parties to sell goods, rather than selling products itself. The company makes the bulk of its money from online marketing services, commissions on transactions and fees for online services.

While the specifics of Alibaba’s U.S. expansion are unclear, the company’s recent stateside investments may offer clues. In March, it invested $217 million in messaging app Tango, taking a 20 percent stake in the company.

And in July, Alibaba took a 10 percent stake of video game publisher Kabam for $120 million. In addition to these outlays, the company has made several smaller investments in U.S. tech startups in recent years.

Meanwhile, Alibaba launched 11Main.com, an online marketplace that seeks to connect U.S. shoppers with owners of specialty shops and boutiques, in June.

Although Alibaba is primarily focused on increasing market share within China, Forrester analyst Kelland Willis believes “they obviously do have their eye on the U.S. (and the investments are) a way to maybe test the waters (and see) what the market looks like here,” she said.

Willis said many of Alibaba’s strategic moves seem to be aimed at amassing consumer data to better tailor e-commerce offerings.

For Amazon and eBay, which command about 20 percent and 10 percent of U.S. e-commerce, respectively, the threat is far from immediate. If Alibaba is planning a full-scale e-commerce expansion into the U.S. market, it will take a while for the company to become an established player.