Vineyard owner Holly Balansag worries consumers may not be able to get their favorites after the wine ages and will look for wine elsewhere. (Photo: David Coates , The Detroit News )Buy Photo

Last year's brutal winter has left Michigan wine makers with few reasons to pop corks. Whining about wine isn't in Holly Balansag's nature, but the co-owner and winemaker of Sandhill Crane Vineyard in Jackson has cause for complaint.

Balansag has harvested about 20 tons of grapes this year, down 75 percent from the previous year because of extremely cold weather brought on by the polar vortex.

"This is the least amount of grapes I've ever harvested in my 11 years here," she said.

Balansag is not alone. Michigan expects about a 50 percent reduction in the state's total wine grape crop, said Linda Jones, executive director of the Michigan Grape and Wine Industry Council.

This statewide problem further hurts Balansag because she's made a commitment to use only locally grown grapes in her winemaking. 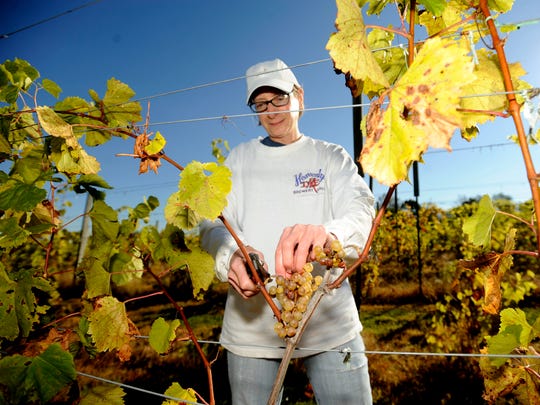 Shelly Glase harvests grapes at Sandhill Crane Vineyard in Jackson. The harvest is down 75 percent from 2013.  (Photo: David Coates , The Detroit News )

"The hardest part will be all the specialty estate wines because I don't have enough of the right grapes to make some of them," she said.

Consumers, she fears, may not be able to get their favorites next year after the wine ages and will look elsewhere, never to return.

Michigan ranks sixth in wine grape production in the United States, Jones noted, although that ranking could drop this year.

The state's 107 commercial wineries produce more than 1.4 million gallons of wine from 40 varieties of grapes. Some of them, like Merlot, Chardonnay, Pinot Noir and Cabernet Franc, are more susceptible to prolonged cold temperature damage.

The wine industry contributes $300 million annually to Michigan's economy. No one has yet estimated how the poor grape harvest will affect it.

Winemaker Sam Simpson, whose family owns Good Harbor Vineyards in Lake Leelanau, recently filed a U.S. Department of Agriculture crop insurance claim after losing about half of the harvest.

"It's the first time we've ever had to file one and we're not sure how much we'll get, but it's better than a kick in the shin," he said.

"When I started this vineyard in the 1960s, I planted 35 varieties when we had winters like this past one, so we discovered which ones could survive in extreme cold," Rink said.

"We have a full crop of those hardy ones this year."

His French hybrid grapes, however, did not thrive. He expects to lose 30 percent of the more tender varieties this year.

The cooler, wet summer also has delayed the harvest and affected the grapes' flavor, he said.

"Some will be more acidic. It won't be a vintage year," Rink said.

"After our winter and lousy summer — it was cool, wet and not a lot of sun — we are having one of the worst seasons in Michigan," Sabbatini said.

It could have been a lot worse, however.

The extra snow Michigan had actually helped many of the grapes survive, Sabbatini said.

"When you have a lot of snow that covers the vine, it acts as insulation," he said, and that helps battle the prolonged extreme cold.

"Some vineyards, because of their location and other factors like wind, had only a little snow."

Not only did the winemakers lose grapes but some also saw their vines, many planted more than 30 years ago, destroyed.

"They will have to replant some vines, and those take three or four years for fruit to develop," Sabbatini said.

"We are coming off a couple of years of very high production with very large harvests in both 2012 and 2013, so the wineries have a great inventory of fan favorites," Jones said. "There just won't be a lot next year with the 2014 vintage."

Retailer John Lossia of Merchant's Fine Wine in Dearborn is interested to see if some vineyards use this as an opportunity to raise the price on their wines.

"I can see a vineyard marketing it that way," he said.

"But remember when Chile had that horrible earthquake and they lost millions of gallons of wine? There was never a shortage of wine or a price increase."

"Some of the best wines I have in the store are Michigan wines," he said.

State of the grape

Michigan's ranking in the wine grape production industry may take a significant drop after the damage to this year's crop.

*year of most recent data