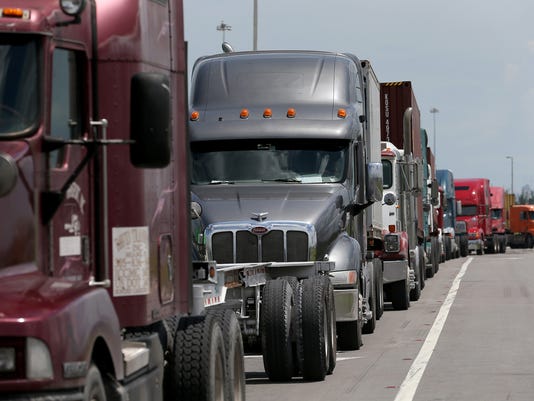 The American Trucking Associations reports the country needs at least 30,000 more drivers, and that the industry must hire 100,000 a year for 10 years to keep pace with retirements, turnover and industry growth. (Photo: Joe Raedle , Getty Images )

On a recent afternoon, Tim Hoag stood in the arrivals area at Minneapolis-St. Paul International Airport looking for a truck driver.

The man he was waiting for, Bill McMahon, had previously driven trucks for Hoag’s company, Copeland Trucking of Fridley, and Hoag made a deal to lure him back.

Because McMahon now lives in California, Hoag agreed to let him drive out there once a month, even though Copeland avoids jobs in California because of the state’s burdensome regulations. But finding drivers is so difficult these days that Hoag was willing to accommodate McMahon’s desire for regular visits home.

“It will be worth it just to have him available here in the Midwest for those three weeks of every month,” Hoag said. “That is what you have to do in today’s environment.”

Across the country, trucking companies, and manufacturers and retailers with their own fleets, are resorting to an array of incentives, including higher wages, to attract drivers.

Wal-Mart Stores Inc., the nation’s biggest retailer and operator of one of its biggest truck fleets, is using radio ads to appeal to qualified truck drivers with an offer of a $76,000 salary plus benefits. That’s far above the national average for truckers, which is around $50,000.

The American Trucking Associations reports that the country has 750,000 “for hire” drivers but needs at least 30,000 more at the moment. It estimates the industry must hire 100,000 drivers every year for 10 years if it hopes to keep up with retirements, turnover and industry growth.

Hoag estimates he turns down 10 hauling requests from potential customers every day. He’s looking to add eight drivers to the 56 who work for the firm.

“We could grow as big as we wanted if we could find drivers,” said Hoag, who owns Copeland with his longtime friend Richard Copeland. “We probably passed up $500,000 to $1 million of work this year because we don’t have enough drivers. But everybody’s in the same boat.”

The reasons for the shortage are plentiful. The job has limited appeal, because it takes drivers away from their families for extended times. Meanwhile, cost cuts by companies during the recession in 2008 and 2009 compressed drivers’ wages. In 2013, truckers were paid 6 percent less, adjusted for inflation, than they were in 2003.

Railroad capacity has been consumed in much of the country by the movement of oil, gas and coal, putting pressure on trucks to move more freight. And new federal regulations have limited the time drivers can spend on the road.

“With the new federal regulations, it is harder to find a qualified driver today than ever before,” said Kyle Kottke, general manager of Kottke Trucking in Buffalo Lake, Minn.

Today, U.S. truckers can only drive 70 hours a week or 11 hours a day. They can only work 14 hours a day, including the hours frequently spent waiting for short staffed warehouses to load or unload their rig. Drivers must regularly pull their rigs into checkpoints where officers check their time on the road. Violators are now reported on national databases.

“It gives the industry a great transparency and allows us to I.D. who we don’t want on the road,” said Kottke. “But it also takes some of these people and puts them permanently on the sidelines.”

With McMahon, the former employee who wanted to get to California once a month, Hoag said he was even willing to buy plane tickets for trips home in order to bring McMahon back to Copeland. That way McMahon, a widower, could spend days with his sons, stepchildren and grandkids.