Higher costs for grocers may not translate into higher prices for shoppers, however. 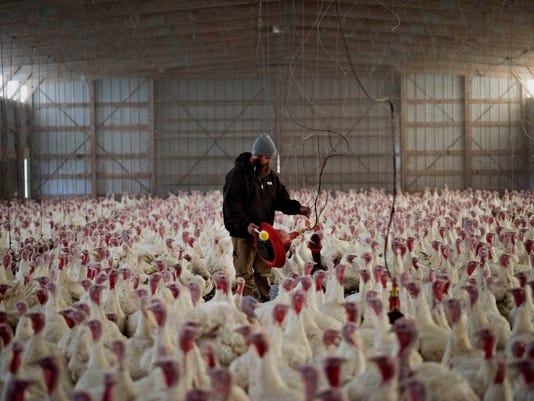 Recent history suggests Americans will eat some 46 million turkeys during Thanksgiving, give or take a few birds.

The problem is that supplies are dropping. While that doesn't mean stores will run out of turkeys before you buy one, costs are climbing. U.S. grocers are currently paying the highest prices ever at the wholesale level.

Farmers produced 4.239 billion pounds in the nine months through September, down 3.3 percent from a year earlier, government data show. Wholesale prices tracked by researcher Urner Barry have jumped 16 percent from a year earlier to a record $1.24 a pound in the week ended Nov. 10, signaling higher costs for supermarkets that usually sell turkey at a discount to spur more holiday business.

More than 20 percent of annual turkey consumption occurs on Thanksgiving, which will be celebrated this year on Nov. 27, the National Turkey Federation estimates. The industry is still recovering from the record-high cost of feed grain during a 2012 drought, which forced reductions in cattle, hog and poultry output and sent meat prices surging. Feed accounts for about two-thirds of the cost of raising turkeys.

"There were quite a bit of cutbacks over the last two years," fueling higher prices that were "desperately needed to cover the actual cost of the product," said Kerry Doughty, the chief executive officer of Butterball LLC. The Garner, North Carolina-based company said it supplies one of every four birds sold in the U.S. during Thanksgiving and Christmas.

Last year, the cost of feeding 10 people a traditional Thanksgiving meal of turkey, rolls, cranberries and nine other items was $49.04, on average, the lowest since 2010, according to the American Farm Bureau Federation. The group is scheduled to update its estimate for this year on Nov. 20.

As of Sept. 30, 297.2 million pounds of whole turkeys were in frozen storage, the lowest for the date since 2011, and inventories of all frozen turkey meat touched 484.5 million pounds, a four-year low, USDA data show.

Tighter supplies are pushing up meat prices more than any other food group in the U.S. Pork chops and ground beef climbed to record highs in September, after a deadly pig virus killed millions of animals and the cattle herd started the year at the smallest since 1951, government data show.

Those price increases are leaking into the poultry market as consumers switch to cheaper alternatives to beef and pork, said Alex Melton, an economist with the USDA Economic Research Service in Washington. Wholesale prices for 8-pound to 16-pound turkeys will average $1.12 to $1.16 a pound in the current quarter, the highest among records going back to 1993, the USDA estimates.

Higher wholesale prices may not mean a bigger bill for consumers. Grocers probably will sell birds "well below" costs to lure shoppers, said Jennifer Bartashus, a Bloomberg Intelligence analyst. Retail whole frozen turkey averaged $1.584 a pound in September, the lowest for that time of year since 2010, according to the Bureau of Labor Statistics.

"They're generally loss-leading items," Bartashus said. "The low turkey price is the enticement to get people into their store."

Meijer Inc., with 213 supermarkets in Michigan, Illinois, Ohio, Indiana and Kentucky, is offering discounts of 50 percent on all turkeys if customers spend $20 at their stores, which sold 700,000 turkeys last November. With the promotion, frozen Meijer-brand turkeys fetch 54 cents a pound, down from 66 cents a year earlier for a 12-pounder, the Grand Rapids- based company said.

Of more than 210 million turkeys consumed in the U.S. during 2012, 46 million were eaten on Thanksgiving, 22 million at Christmas and 19 million during Easter, the National Turkey Federation said, based on the most recent data available.

Butterball expects a 3 percent increase in sales for November and December to about 20 million birds, weighing 16 pounds each on average, CEO Doughty said. With "absolutely outstanding" growth and health of turkeys this year, total poundage for fresh birds will be up 12 percent to 15 percent, he said. Last year, the company faced "limited availability" before Thanksgiving amid a decline in weight gains.

Output will rebound next year as the cost of feed declines, Butterball's Doughty said. Production fell after a drought in 2012 sent corn to a record $8.49 a bushel. Since July, corn traded below $4 until yesterday, touching a five-year low last month. An index of turkey-feed cost in September was 17 percent less than the same month in 2013, USDA data show.