The day-long Detroit Policy Conference examines perception many blacks are being excluded from the city's resurgence.

Despite the rebirth of Detroit's downtown and Midtown and its emergence from bankruptcy, the city, as it has for decades, remains deeply divided along race and class lines.

The "Two Detroits" referred to the growing perception that many long-time African American residents are being excluded from the rebounding parts of the city. It plays out in the mainly white crowds patronizing the new bars and restaurants; whites moving into the new apartments and condos; and the fact that few new minority businesses are being celebrated in the media.

Panelist Dennis Archer Jr. president and CEO of Ignition Media Group in Detroit agreed the downtown Detroit clientele can be more white than many suburbs. That is because many successful minorities choose to live in the suburbs, as do their white economic counterparts.

"For the family that left Detroit and moved to Birmingham, and there are plenty of great restaurants closer to them, and so there is less incentive to come back," said Archer, whose father is former Detroit Mayor Dennis Archer Sr.

Detroit News Editorial Page Editor Nolan Finley, who moderated the panel and has written extensively about the "Two Detroits," observed: "I don't expect in a city that is 83 percent black to go to a place and everyone is as white as me." 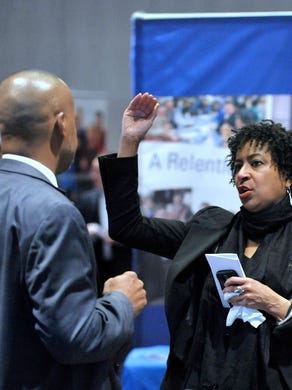 Attendees gather in The Detroit Experience Hall as they talk to vendors. Todd McInturf, The Detroit News
Fullscreen

Detroit Mayor Mike Duggan holds up a Grow Detroit's Youth Talent (GDYT) Summer 2015 commitment form, asking companies to hire youth, ages 14-24, for a six-week youth employment program. The company or individual can pledge $2,000 to pay the youth for the program, but if they are unable, can commit to a 50-50 plan with the city of Detroit. The city pays $1,000 and the company pays $1,000. Todd McInturf, The Detroit News
Fullscreen 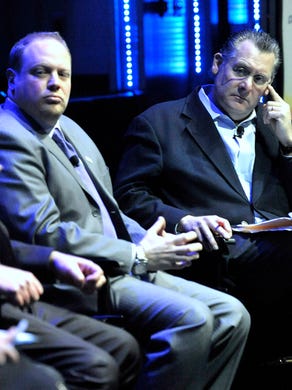 Nolan Finley, left, editorial page editor of The Detroit News, and Dennis Archer Jr., president and CEO of Ignition Media Group, participate in a panel discussion called Uniting Two Detroits, which touched on the "two narratives emerging in the post-bankruptcy era -- one of a resurgent downtown juxtaposed with struggling neighborhoods." David Guralnick, The Detroit News
Fullscreen

In a 7.2-square-mile swath of Detroit — essentially downtown, Corktown, Midtown, the riverfront and Lafayette Park — investment is red-hot. There are almost weekly announcements of an upscale restaurant opening, or the purchase and renovation of a once-empty building in the city's core.

Foundations and other institutions finance incentives to lure residents to Midtown and downtown. Nine out of 10 rental units in the 7.2-square-mile area are occupied, according to studies. Rents have been going through the roof, in some cases increasing by $3,000 a month in one year for the same place.

Eric Williams, director of Wayne State University's program for entrepreneurship and business law, said he doesn't believe the racial divide is intentional. "I do not think there is a grand conspiracy," Williams said.

But the gap reflects the fact that many white young entrepreneurs often have a deeper network of entrepreneurial and social contacts than many minority startups do, Williams said.

There are many black entrepreneurs in Detroit, said Detroit Council member Andre Spivey. But he said they often get less media attention than do white startups.

"Maybe the black entrepreneur isn't creating as many as the new restaurants in the hip new part of town," Archer said. He added many minority businesses are succeeding in Detroit.

Another solution is to be more committed to a diversified work force, said Cindy Pasky, president and CEO of Strategic Staffing Solutions, based in downtown Detroit. Many businesses can improve on that front, she said.

Throughout the day, many panelists and attendees said they believe the city has emerged in a stronger position due to the bankruptcy, which shed $7 billion in debt, shielded the city's art collection and minimized cuts to the pensions of retired city workers.