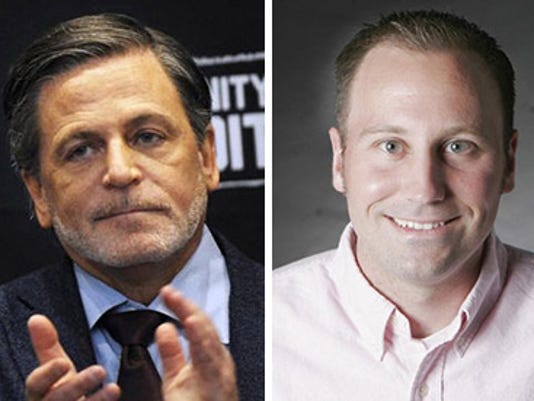 Dan Gilbert may be fighting with the Justice Department but that doesn't mean he lacks time to scrap with an online Detroit journalist and Lansing newspaper reporter.

The Quicken Loans founder didn't care for a report Sunday by the online Motor City Muckraker that he installed surveillance equipment on downtown Detroit buildings he doesn't own.

When a Gilbert supporter told him he should ignore the criticism, he said he was moved to respond when his teenage kids asked about it.

"Just once in awhile you have to let the lying venom filled wannabes know that they will be held accountable," he tweeted.

I know.&quot;Ignore them&quot;.Just once in awhile you have to let the lying venom filled wannabes know that they will be held accountable.Goodnight!

Steve Neavling, who runs the online site, joined the fray, asking Gilbert what was libelous about his reporting.

Gilbert wasn't immediately available for comment Monday night. But in a story on detroitnews.com on Monday, Gilbert's Bedrock Real Estate Services said claims that the cameras were added without the owner's permission were false.

"Nothing can be further than the truth; we don't do that," said James Ketai, CEO and co-founder of Detroit's Bedrock Real Estate, on Monday.

The camera and transmitter were installed by the former Compuware Corp., not Bedrock, Ketai said.

But the developer wasn't done yet Sunday.

Eric Lacy, a reporter for the Lansing State Journal, objected to Gilbert being described as "Detroit street tough" in a Detroit News column Sunday.

When Lacy voiced that opinion on Twitter on Sunday night, Gilbert belittled the reporter for earlier tweets about news coverage of Bruce Jenner becoming a woman.

"This coming from a "tough guy" who spends half his weekend tweeting about Bruce Jenner," tweeted Gilbert. "Keep smirking, Lacy."

. @EricLacy This coming from a &quot;tough guy&quot; who spends half his weekend tweeting about Bruce Jenner. Keep smirking, Lacy...

Lacy responded that Gilbert's remark inspired him to make a donation to the Ruth Ellis Center for homeless LGBT youth in Detroit.

When not fussing with reporters, Gilbert is embroiled in dueling lawsuits with the U.S. Department of Justice. The feds accuse Quicken Loans of approving hundreds of mortgage loans that didn't meet federal standards from 2007 to 2011.

The company counter-sued, saying it did nothing wrong.