Bob and Eileen Hickey, tboth 79, of West Bloomfield, look at the photowalk on display at the Riverwalk.(Photo: Clarence Tabb Jr., The Detroit News)Buy Photo

— Tourism officials with the Pure Michigan campaign believe this summer will be the best one yet when it comes to visitors coming to the state and bringing business.

"I just see positive increases all over," said David West, the vice president of Travel Michigan and the head of the Pure Michigan campaign. "This is the first summer we're going to have gasoline at what it is, there is a lot more disposable income, the economy is doing better and we just hit a new low unemployment rate, so that combination is really what generates a lot of visitors."

West said the state should see 2 to 2 1/2 percent growth overall growth in visitors from around the world.

West was joined by leaders with the Detroit Riverfront Conservancy and the Detroit Metro Conventions & Visitors Bureau Friday morning during an unveiling of the campaign's latest attraction: the Pure Michigan PhotoWalk.

The display includes more than 1,000 photos submitted by Instagram and Facebook followers and through contests using "#PureMichigan." The displays are divided by city and run between Rivard Plaza and the Renaissance Center buildings along the Detroit River Walk.

"Nothing is more Pure Michigan than the Detroit River Walk," said Mark Wallace, President and CEO of the RiverFront Conservancy. "The PhotoWalk is the latest example of how we are all working together."

People view the photos on the PhotoWalk at the Riverwalk. (Photo: Clarence Tabb Jr. / The Detroit News)

The display is also a celebration of the Pure Michigan campaign getting 1 million Facebook followers, more than any other state in the Midwest and the third most in the nation. The campaign itself will turn 10 next year and right now every dollar spent on advertising yields $6.87 dollars returned to the state, said West.

That will be an important point for proponents of Pure Michigan's effectiveness as they lobby to stop a plan put forth by Republican lawmakers to divert funds for the campaign to help pay for road repairs.

House Speaker Kevin Cotter proposed plan to provide $1.05 billion in road funding that relies on redirecting $75 million from fund that pays for the Pure Michigan advertising campaign. Another $60 million would come from revenue the state gets from tribal casinos that typically goes toward job creation.

The plan quickly drew criticism from the state tourism industry, with people saying it would lead to fewer visitors and, in turn, less money for the state.

West said good roads are important to tourism, and tourism can help pay for it by bringing in more visitors.

"It's an engine that gives, not takes. This would put a wrench right into that engine," said West.

Visitors to the River Walk on Friday were among the first to see the new PhotoWalk display. Bob and Eileen Hickey of West Bloomfield had nothing but praise for it. She grew up in Detroit and said she is impressed by everything that has changed. He said the Pure Michigan campaign has done wonders for the state.

"The ads are one of the best things our state has ever done," said Bob Hickey. "If the state ever stopped supporting it, I don't think we'd have the same number of tourists coming here." 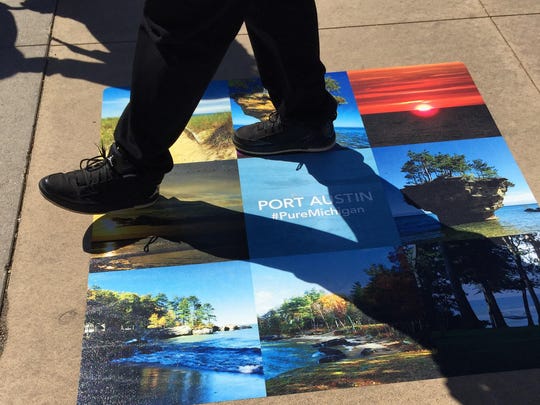