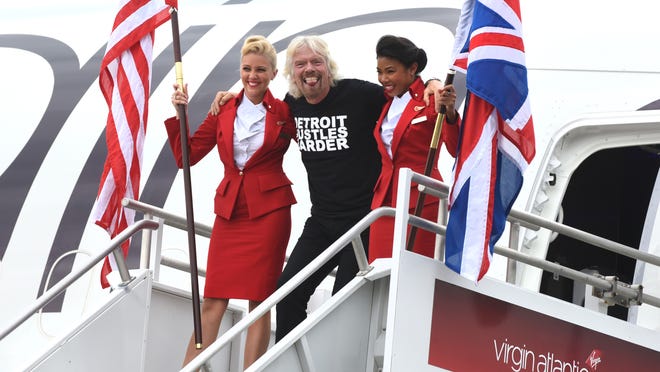 Branson was given the presidential treatment upon arrival in the Boeing 787-9 named "Dream Jeannie." That included flags and a gaggle of photographers waiting on the tarmac to snap pictures.

"You have a great city that has been an underdog city for years that is fighting back," said Branson. "It will be one of the great cities of America again."

Launched June 1, Virgin Atlantic is offering a new daily service between Detroit and London Heathrow. The airline expects to serve about 155,000 passengers annually between the two cities.

The venture with Delta was launched in January 2014. It gives Virgin access to a much larger U.S. network of connecting flights out of the Delta hub in Detroit.

"This is what Wayne County and the region around Detroit needs, growth like this, partnerships like this," said Evans. "This is going to be great for tourism dollars and business dollars."

Virgin Atlantic will operate the route on an A330-300, which has 33 upper class, 48 premium and 185 economy seats. Alongside Delta, the airlines will operate 39 daily flights across the Atlantic from 11 U.S. locations like New York, Boston, San Francisco and Detroit.

The airline is famous for its upper class seats that turn into full-size flat beds and for Branson's infectious personality, thrill-seeking and philanthropy.