Snyder: ‘I think we will see more trade’ with China

The Michigan governor and Chinese dignitaries signed a memorandum of understanding with four provinces and a city.

Snyder: ‘I think we will see more trade’ with China 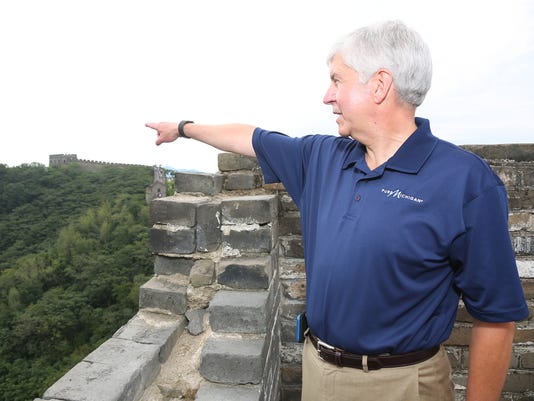 Gov. Rick Snyder stands on the Great Wall of China during a business trip Monday.(Photo: Flickr)

Gov. Rick Snyder expects Michigan to benefit from more trade and investments with China, despite growing concerns over the country’s economic slowdown.

In an effort to support economic prosperity between the two sides, Snyder and Chinese Ministry of Commerce Deputy Minister Zhang Xiangchen on Tuesday presided over a signing of a memorandum of understanding between the state and representatives of four of China’s provinces and a city.

“I think we will see more trade and investment. That is the goal,” Snyder said during a phone interview Monday night from Beijing.

“This is a format to make sure we all work together toward that end. It’s continuing to strengthen relationships that are already pre-existing, but to make them stronger and better.”

The agreement is part of Snyder’s eight-day trade mission to China that started Friday. Officials are focusing on promoting job-creating business growth and investment for Michigan. This is his fifth mission.

However, the announcement comes a day after the Dow Jones industrial average on Monday briefly plunged more than 1,000 points before closing the day down 3.6 percent — partly due to a global wave of selling triggered by the slowdown in China.

“Whether it slows down or not, I think it’s very much a positive that it gives us a chance to build better relations,” Snyder said, adding each member of the agreement has already sent delegations to Michigan.

“We have ties already going on. What this does is sort of create a framework to have it grow and strengthen even more.”

The memorandum of understanding enables the jurisdictions to increase cooperation and carry out exchanges in prominent fields such as industry and agriculture; economic activities and trade; science and technology; and others.

Michigan is one of only five of states and cities to have reached agreement with five major industrial regions of China. They are Guangdong, Sichuan, Hubei and Zhejiang provinces and the city of Chongqing.

The announcement comes less than a year after the governor’s fourth trade mission to China, when his office announced the signing of two major memorandums of understanding between for the Michigan Automotive Office with the Chinese Association of Automotive Manufacturers and the Chinese Council for Promotion of International Trade Automotive Committee.

The state, according to Snyder, has attracted more than $1 billion in investment from China, Japan and Korea since his first mission to Asia in 2011. China — Michigan’s third-largest export market, after Canada and Mexico — is an extremely important region for Michigan’s automotive sector.

Snyder also is using the trip to tout the state as a tourism destination. The governor’s office says tourism last year generated $22.8 billion in economic activity in Michigan and supports more than 214,000 jobs. According to the U.S. Department of Commerce, 1.5 million Chinese visited the U.S. in 2012. That’s up more than a third from the year before.

Snyder has met and will continue to meet with company officials and politicians in China, with many discussions focusing on automotive. The trip ends Saturday.

The Michigan Economic Development Corp. is leading a concurrent trip of seven Michigan companies — many auto-related — that are meeting with prospective business partners, distributors and buyers.