Americans stepped up their purchases of new homes in July, with sales surging in the Northeast 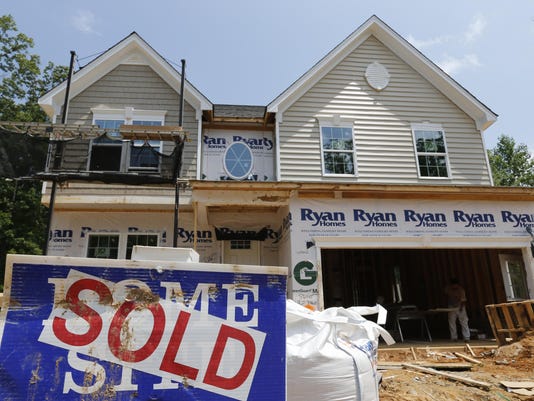 A sold sign is displayed outside a new home under construction in Mechanicsville, Va. The Commerce Department says new-home sales rose 5.4 percent last month to a seasonally adjusted annual rate of 507,000, recovering from a slide in purchases in June.(Photo: Steve Helber / AP)

Washington — Americans stepped up their purchases of new homes in July, with sales surging in the Northeast.

The Commerce Department says new-home sales rose 5.4 percent last month to a seasonally adjusted annual rate of 507,000, recovering from a slide in purchases in June.

Buyers have crowded into the housing market this year. Backed by solid job growth over the past two years and relatively low mortgage rates, sales of new homes jumped 21.2 percent through the first half of 2015, although the government sales report is volatile on a monthly basis.

New-home purchases climbed 23.1 percent in the Northeast, with smaller gains in the South and West. Sales slumped in the Midwest.

Housing is once again driving growth as the stock market has stumbled. Americans have felt more confident about their economic prospects, causing them to return to the housing market that initially sparked the Great Recession in late 2007. But supplies of new and existing homes have been tight, pushing up prices and limiting choices for would-be buyers.

There is 5.2 months’ supply of new homes available, compared to six months in a healthy market. The shortage of listing has enabled the median price to rise 2 percent over the past 12 months to $285,900.

The National Association of Realtors said last week that sales of existing homes rose 2 percent last month to a seasonally adjusted annual rate of 5.59 million, the fastest rate since February 2007. Sales have jumped 9.6 percent over the past 12 months, while the number of listings has declined 4.7 percent.

There are some signs that sales momentum might slow as more Americans are renting instead of buying. Real estate brokerage Redfin said its demand index fell in July for the fourth straight month, while real estate firm Zillow reported that rental prices are rising in many markets where home values are falling on a month-over-month basis.

Much of the additional demand has emerged for a healthier jobs market and low mortgage rates. Employers added 3.1 million jobs last year and are on pace to add 2.5 million jobs this year.

The average 30-year fixed rate was 3.93 percent last week, according to the mortgage giant Freddie Mac.