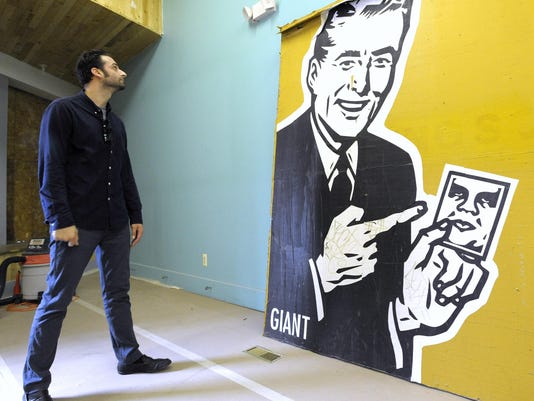 Detroit filmmaker Geoff George had to remove this Shepard Fairey art from the front of his building to keep it from being defaced.(Photo: Todd McInturf / The Detroit News)Buy Photo

At first, Geoff George was elated when world famous street artist Shepard Fairey left an original work on the front of George’s Gratiot Avenue building in May — at least everyone believes Fairey was the creator. Then, quickly, reality hit.

The building soon became the target for many not-so-famous street artists. Someone put a gaping hole in the plywood holding the wheatpaste poster believed to be created by Fairey, leaving the building vulnerable to a break-in. Things only worsened when Fairey was arrested on charges of malicious destruction of property in July.

“The artist in me was just thrilled. But, almost immediately the building owner side of me kicked in,” George said, who is a 29-year-old filmmaker. “I started to worry … is the city going to hit me with a blight violation? How badly is my building going to be targeted?”

Fairey faces a criminal trial on charges of malicious destruction of property for allegedly causing an estimated $30,000 damage on at least nine Detroit buildings. George’s building is not among them.

Fairey has neither admitted nor denied he is the one who did the work that mimics his style and led to the charges. He faces a maximum 10-year prison sentence and $10,000 fine if he is convicted.

What matters is many believe Fairey created the work on George’s building — enough people so that others began to tag the building as soon as the art mysteriously appeared.

What was left on George’s building was a 6-foot tall poster displaying a clean-cut man in a suit holding a card that bears the image of “Andre the Giant,” the former professional wrestler and actor. The 45-year-old Fairey is known for his Andre the Giant images. Fairey is also known for the “Hope” campaign poster he created for President Barack Obama.

“I love the work,” George said of the poster left on his building.

This year, George bought the two-story storefront on Gratiot near Eastern Market and is fixing it up. It had been empty for years and still has plywood where the windows used to be.

Fairey was in Detroit in May creating the largest work of his career. He was commissioned by the billionaire developer and businessman Dan Gilbert to paint an 18-story mural for downtown’s One Campus Martius building. At the time, Fairey was quoted as saying he intended to commit random acts of art in Detroit.

“When I first heard he was in town, I actually kind of wished he’d leave something on my building,” George said.

Within 24 hours of the poster appearing, social media spread the word George’s building had a Fairey work. Shortly after, others began to leave graffiti on his building and that included the poster. Some sort of fluid was splashed on the work.

“Shepard Fairey left art on my building; others just started to tag my building. There is a huge difference,” George said.

“Shepard Fairey left art on my building; others just started to tag my building. There is a huge difference,” Geoff George says. He spend several hundred dollars to remove the graffiti. (Photo: Photos by Todd McInturf / The Detroit News)

George said he had to spend several hundred dollars to clean off the tagging. One incentive for cleaning up the building quickly is that Detroit is now being aggressive in fining property owners hundreds of dollars for having blight such as graffiti on their buildings.

He covered the Fairey poster in plexiglass to protect it from being defaced.

Then, Fairey was arrested in July 6 at Los Angeles International Airport for his alleged crimes in Detroit.

Suddenly, a steady stream of people were stopping to take selfies next to the poster on George’s building. Soon, it got “creepy,” George said. “I was standing in front of my building and someone in a pickup truck drove up and offered me $2,500 on the spot to remove it.’

That would have been a lousy deal. An original work by Fairey can easily fetch tens of thousands of dollars.

George has video surveillance monitoring his building and he captured footage of someone with a tape measure sizing up the poster. George took video of what is believed to be another Fairey poster being removed from another building close to his property. Other works believed to be Fairey’s were being stolen around the city.

George removed the poster and has it stored in an undisclosed location.

“Politicians and prosecutors shouldn’t be the ones who make the esthetic choice about what’s art and what’s graffiti,” George said.

But he reluctantly admits prosecutors may have a point. “They’re right in the sense that it’s all vandalism and you can’t treat people differently.”

George doesn’t understand why so many locals are getting away with tagging buildings. “A lot of these local artists have websites, they’re on Instagram and Flickr,” he said. “Why isn’t the city going after them?”

George says he’s far more concerned about other issues such as getting the street lights to work in front of his building.

As for his own alleged Fairey work, George won’t sell it for personal gain. “Selling someone else’s art is wrong. I want to figure out a way to show it publicly,” he said.