With online shopping growing, FedEx is bracing for a record volumes this holiday season 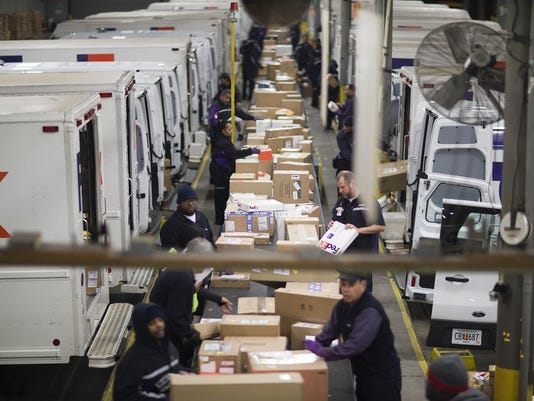 With online shopping growing, FedEx is bracing for a record volumes this holiday season.

The delivery company predicted Monday that shipments from Black Friday through Christmas Eve will rise 12.4 percent over last year to 317 million pieces.

The company said that to handle the crush, it is hiring more than 55,000 seasonal workers and investing in automation and expansion.

Rival United Parcel Service Inc. will release its holiday forecast on Tuesday, said spokesman Steve Gaut. He said that the same trends leading to FedEx’s forecast of more shipping will affect UPS too.

Delivery companies like UPS and FedEx Corp. have profited from the continuing shift in shopping from stores to online. Even still, the FedEx forecast is a bullish one. The National Retail Federation, for example, predicted that online sales in November and December will rise by between 6 percent and 8 percent over late 2014.

Planning for holiday demand can be treacherous for the delivery giants. After being caught off-guard by a late surge in shipping during 2013, they greatly increased their seasonal work forces last year. The heavy spending pulled down earnings at UPS, although FedEx profit rose.

FedEx and UPS now talk to retailers throughout the year to plan for the spike in holiday shipping. Much of the surge is driven by retailers that promise free shipping even in the last days of the gift-sending season.

“We need to make sure that if they are looking at moves like that, they need to understand what our capacity is,” said FedEx senior vice president Patrick Fitzgerald. “We do limit some delivery commitment to customers where necessary. That’s not very common.”

Free-shipping promotions aren’t likely to disappear: Nearly half of shoppers surveyed by the retail federation said free shipping is an important factor in their buying.

FedEx said that the busiest shipping days will be the Monday after Thanksgiving and the first two Mondays in December.

The first big test for the delivery companies will come on Monday, Nov. 30, so-called Cyber Monday, when FedEx expects to handle at least 20 million packages or double the daily average during the holiday season.

FedEx gets a break, however, Fitzgerald said: More online shoppers now get started early, spreading those orders and shipments over the Thanksgiving weekend instead of waiting for Monday.