‘Off odor’ leads Tyson to recall 52,000 pounds of chicken wings

‘Off odor’ leads Tyson to recall 52,000 pounds of chicken wings 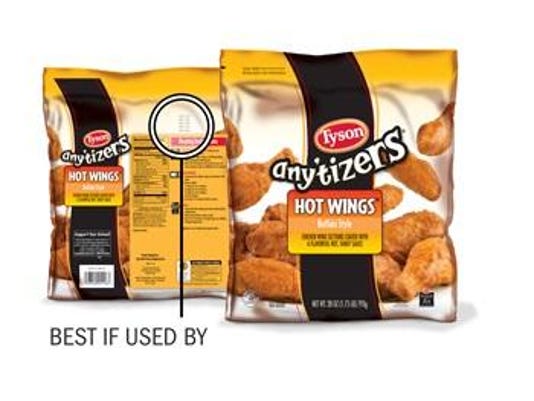 The chicken is sold retail in 28-ounce bags and is carried by stores nationwide.

The Any’tizers were pulled after the company heard from customers who said the product “had an off odor,” according to the release. The chicken in question was produced on Oct. 24 and 25 at the company’s facility in Pine Bluff, Arkansas.

“There have been no confirmed reports of adverse reactions due to consumption of these products by FSIS,” said a United States Department of Agriculture release on the recall. “Anyone concerned about an injury or illness should contact a healthcare provider.

“Consumers who have purchased these products are urged not to consume them. These products should be thrown away or returned to the place of purchase,” the release continues.

The USDA is considering this a Class II recall, which means “there is a remote probability of adverse health consequences from the use of the product.” Class I recalls involve high risks that eating the recalled foods could produce negative health consequences, including death. Class III recalls involve little risk that eating the recalled food will make a person sick.

A retail distribution list, detailing which stores received the recalled chicken, will be available through the USDA’s website, the agency says, but was not immediately available.

Consumers with questions may call Tyson Consumer Relations department at (866) 328-3156.