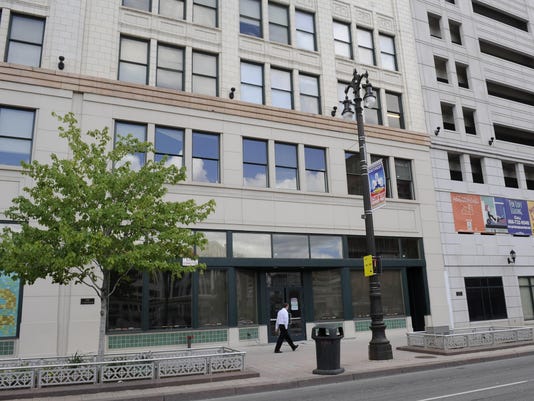 The three-story historic building is across the street from the empty Hudson’s block, which is slated to be the future home to a landmark-quality new structure with retail, office and residential.(Photo: Detroit News file)

The iconic American brand is stepping into the former Woolworth’s at 1261 Woodward, Dan Gilbert, the billionaire founder of Quicken Loans with its property arm Bedrock Real Estate Services, announced Wednesday on Twitter, writing it will open in the spring.

“Believe. Then see it,” Gilbert tweeted.

The three-story historic building is across the street from the empty Hudson’s block, which is slated to be the future home of a landmark-quality new structure with retail, office and residential. The ground floor of the building Nike is interested in was used for the recent pop-up “Somerset Collection.”

In a statement Wednesday Lisa Beachy, spokeswoman for Nike said “We look forward to bringing Nike’s performance products and experiences to downtown Detroit with our sixth Community Store, scheduled to open in 2016. Through job creation and volunteer efforts, we hope to both positively impact the Detroit community and the local economy.”

The size of the Nike store means it may be slightly bigger than its average outlet store but far smaller than its bedazzling flagship seen in upscale urban shopping areas. The proposed store is similar in size to the Whole Foods store in Midtown, which is 21,500 square feet.

Nike hopes to operate an environmentally friendly store. Its application to the U.S. Green Building Council shows Nike has labeled the potential Detroit shop as a “community store.”

That means the store will “empower a healthy local community through the unifying power of sport and to serve as a catalyst for positive change by partnering with local organizations,” according to the company’s website. All Nike community stores have local hiring initiatives with the goal of hiring at least 80 percent of employees from within a five-mile radius of the store.

Nike is an international brand of athletic shoes, apparel and sports equipment.