Harriet Tubman will go on $20 bill; Jackson moves to the back

Harriet Tubman will become the first woman on U.S. paper currency in 100 years

Harriet Tubman will go on $20 bill; Jackson moves to the back 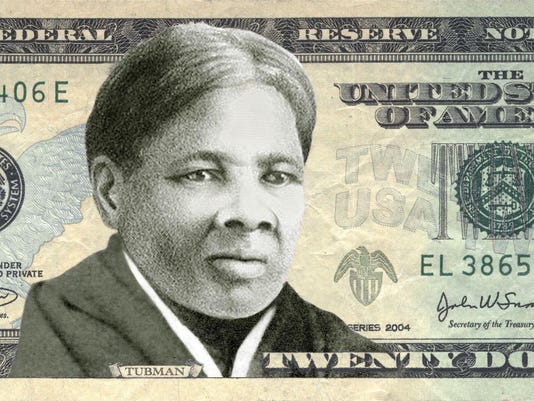 Women on 20s, which led the charge for woman on U.S. currency, made an image of what a Harriet Tubman $20 could look like.(Photo: Getty Images)

Harriet Tubman will replace President Andrew Jackson as the face of the $20 bill, and Jackson will be moved to the back of the bill alongside an image of the White House, Treasury Secretary Jacob J. Lew said Wednesday.

Alexander Hamilton, the nation’s first Treasury secretary, will remain on the front of the $10 bill, but the back of that bill, which currently bears an image of the Treasury building, will feature leaders of the suffrage movement.

“It’s a decision that reflects a good deal of listening,” Lew told reporters in Washington on Wednesday. “Harriet Tubman struck a chord in all parts of the country.”

The reverse of the $5 bill will be overhauled to include opera singer Marian Anderson, first lady Eleanor Roosevelt and civil rights leader Martin Luther King Jr.

Lew said the designs of all three bills are slated to be completed and unveiled by 2020, the 100th anniversary of the passage of the 19th Amendment, which gave women the right to vote.

The news deviates from Lew’s original plan, which was unveiled last summer. That plan involved changing only the $10 bill; the department intended to put a woman on the $10 bill by 2020. Lew had said that either Hamilton would share the bill with a woman or the Treasury would release two different bills.

Lew’s original plan to change the $10 suffered backlash from several directions. Many who objected said the only woman on the nation’s paper currency should be featured alone on the bill, rather than sharing space with a man. Some said the $20 bill should be changed instead, as its ubiquity in ATMs gives it a much higher profile than the $10.

Some objected to the plan because of the historical figures involved: Hamilton played key roles in founding the nation and establishing the Treasury, whereas Jackson was a slave owner whose policies led to the deaths of countless Native Americans, and he opposed having a U.S. central bank. And Hamilton’s popularity has grown in the past year with the success of “Hamilton,” the blockbuster Broadway musical chronicling his life.

Suggestions by Lew that a woman might not be featured on the front of the new bill triggered a backlash among women’s rights activists. Lew suggested in an interview March 30 with Charlie Rose that the government might leave Hamilton’s portrait on the front, saying the former Treasury secretary is one of his heroes.

“Hell hath no fury like a woman scorned,” Lisa Maatz, American Association of University Women’s vice president of government relations, said last week, before the new bill was introduced. “A promise was made and it should be fulfilled. I don’t know any particular reason why they would back away from it.”

A group of women including feminist icons Gloria Steinem and Marlo Thomas and soccer star Abby Wambach sent a letter to Lew on Wednesday before his announcement urging him to put a woman on the front of the $10. They started a Twitter hashtag #NotGoingBack to urge him to keep what they said was a promise to replace Hamilton with a woman.

“As a country, it is about time we put our money where our mouth is in the fight to support women,” they wrote.

Women on 20s, the group that has led the charge to feature a woman on U.S. currency, sent a letter to Lew and U.S. Treasurer Rosie Rios last week asking that they fulfill the promise to put a woman on the $10 bill.

In their letter to Lew, Women on 20s wrote that “relegating women to the back of the bill is akin to sending them to the back of the bus.” Analogies to Rosa Parks, a black woman whose refusal to sit in the rear of a city bus made her a symbol of and leading civil-rights activist, “are inevitable,” the group said.

Women on 20s conducted an online poll last year, saying a woman should appear on the $20 bill in Jackson’s stead and asking which one. Tubman, an abolitionist and key figure in the Underground Railroad, came in first, followed by first lady Eleanor Roosevelt, Parks and Cherokee Nation Chief Wilma Mankiller.