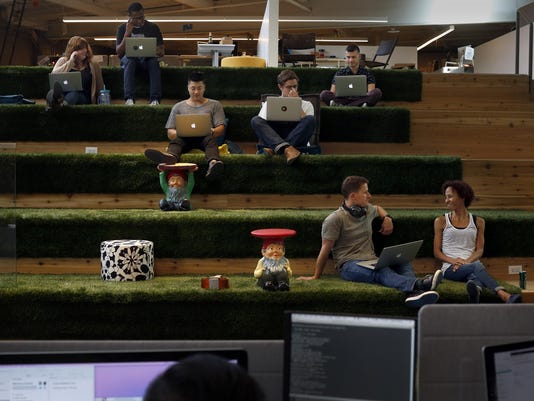 The three businesses make consumer goods, yet they’re all backed by heaps of venture capital — the type of funding that fuels the tech world.

So why are the biggest investors in technology backing firms whose tech prowess amounts to little more than a nifty website and a social media team?

It’s a question that lingers in the Herman Miller-gilded boardrooms of venture capital firms. And it’s one that underscores how Silicon Valley, despite its reputation for world-changing ideas, can also quietly embrace the mundane.

“It’s a debate we’re constantly having,” said Venky Ganesan, managing director of Menlo Ventures, which invested not only in Stance, but also Uber and Siri before it was sold to Apple Inc. “Does the world need a cure for cancer or another e-commerce startup?”

No one was asking that half a century ago when Wall Street financiers first took notice of the innovations — largely for the military — coming out of commercial labs in California and research universities such as Stanford. Those bankers would engender a culture of risk-taking that believed, with a little funding, crazy ideas like the microchip could take flight in a big way.

“In the old days, the Valley went for moonshots in part because of, well, moonshots,” said Margaret O’Mara, a history professor at the University of Washington. “Venture capitalists invested in and nurtured companies doing these things because very small companies could grow large by building sophisticated little devices.”

But even early on, there was a willingness to explore investments that had little to do with technology.

Draper, Gaither & Anderson, one of the first venture capital firms when it opened in 1959 in Palo Alto, California, invested in drugs for glaucoma as well as cushioned playground surfaces.

Kleiner Perkins Caufield & Byers, the money behind game-changing companies such as Tandem Computers, also invested in a sneaker-resoling business and a hybrid between a motorcycle and snowmobile called the Snow Job.

“It took a while for these firms to develop their reputations,” said Leslie Berlin, a project historian for the Silicon Valley Archives at Stanford. “They had to figure out which business models worked for them.”

Those business models have generally depended on the technological trends of the day — from the personal computer revolution to the rise of the Internet.

For a time, e-commerce itself was on the technological forefront thanks to venture-backed firms like Amazon and Webvan, which helped introduce online shopping to the masses. They inspired entrepreneurs to create digital alternatives to retail — a trend that continues unabated in all manner of consumer categories, including mattresses (Casper, $71 million raised) and tuxedos (Generation Tux, $25 million raised).

The appeal of consumer goods like shampoo and razors is that you don’t have to explain why anyone needs them, making them a somewhat safer bet than, say, a virtual reality startup or a builder of flying cars.

Venture capital firms invested more than $1 billion in retail and distribution in the U.S. last year, more than five times the 2013 sum, according to the National Venture Capital Association. An additional $4.8 billion went to consumer products and services, nearly four times more than 2013. In that time, retail has nearly tripled to 1.7 percent of all venture capital investment while consumer goods and services has nearly doubled to over 8 percent.

Many in this new wave of consumer startups differ from Amazon in that they don’t live and die on complex algorithms to manage inventory or drive sales. Instead, they buy third-party software to build an e-commerce platform, then lean on clever marketing to differentiate their brands.

The result? Innovation no longer has to be defined by technology, but simply enabled by it.

“You don’t always need tech to be transformative,” Ganesan said.

Take Dollar Shave Club, which has been so disruptive to the razor industry that its main rival, Gillette, was compelled to launch a similar online subscription service and later filed a patent lawsuit against the Los Angeles startup.

Despite that, there’s nothing particularly cutting-edge about Dollar Shave Club’s razors. They’re made by a South Korean manufacturer, Dorco, which sells the same blades to many customers (though the brand’s grooming products are developed in-house).

What Dollar Shave Club does expertly is marketing. Founder Mike Dubin is famous for his tongue-in-cheek commercials, which have racked up tens of millions of views on YouTube. And the company’s social media and customer service teams have spread that irreverent attitude online.

In a similar fashion, Honest Co. has benefited from skillful marketing and ample media coverage of Alba, its Hollywood A-list co-founder. The brand, which largely uses contractors to make its products, has positioned itself as a more natural alternative to mainstream sellers of things like soaps, shampoos and detergents.

There are also major advantages of going Web-only. Dollar Shave Club can deliver its products nationwide to anyone without the risks and costs of opening physical stores. And thanks to its subscription model, the company knows the buying habits of its customers intimately — a powerful edge on legacy brands.

Dollar Shave Club does this with software built by its own engineers, suggesting that some consumer startups may be more technical than they appear.

“It’s almost like these things are so commonplace you forget how revolutionary it is,” Jeremy Liew of Lightspeed Venture Partners said of online retailers.

To Liew, whose firm has backed Honest, apparel brand Bonobos and fashion subscription service ShoeDazzle, the success of e-commerce startups proves how straightforward his job is.