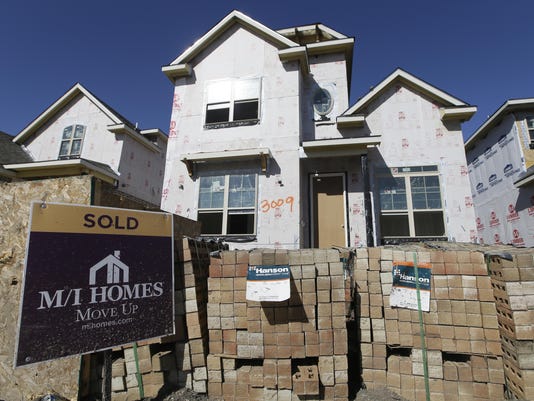 New-home sales slipped 1.5 percent last month to a seasonally adjusted annual rate of 511,000, the Commerce Department said Monday. That rate has steadily fallen from 519,000 in February and 521,000 in January. Sales plummeted 23.6 percent in the West, an area prone to volatile swings in sales as one of the nation’s priciest housing markets.(Photo: LM Otero / AP)

Americans stepped back from buying new homes in March, the third straight monthly decline as sales plunged sharply in the Western states.

New-home sales slipped 1.5 percent last month to a seasonally adjusted annual rate of 511,000, the Commerce Department said Monday. That rate has steadily fallen from 519,000 in February and 521,000 in January. Sales plummeted 23.6 percent in the West, an area prone to volatile swings in sales as one of the nation’s priciest housing markets.

The market for new housing developments has gotten off to a rocky start. Sales are still running slightly ahead of the year-to-date pace in 2015, yet supplies of new construction are mounting in a possible sign that demand is lower than many builders had hoped.

“While new home sales have lost some luster in recent months, we believe they will re-accelerate as we head into (the) spring season,” said Gregory Daco, head of U.S. macroeconomics at Oxford Economics, a forecasting firm.

Sales were flat in the Northeast and rose in the Midwest and South. Prices dipped with sales declining in Western states where land often commands a higher premium. The median new-home sales price fell 1.8 percent from a year ago to $288,000.

The market’s stalling momentum comes amid an incomplete recovery from the housing crash of almost a decade ago. New-home sales are significantly below the half-century average of more than 650,000. Subprime mortgages helped propel sales as high as 1.28 million in 2005, but the debt resulting from that peak led to series of foreclosures that triggered the Great Recession.

The recent unevenness in real estate has also been seen in sales of existing homes.

The National Association of Realtors said last week that sales of existing homes rose 5.1 percent in March to a seasonally adjusted annual rate of 5.33 million, a partial rebound after a sudden drop in February.

Fewer existing properties are being listed for sale, causing prices to rise. Listings have dipped 1.5 percent over the past 12 months, despite a foundation of demand caused by lower mortgage rates and healthy hiring levels.

Builders still expect sales growth, though they have been more cautious in recent months.

The National Association of Home Builders/Wells Fargo builder sentiment index has held at 58 for the past three months. Readings above 50 indicate more builders view sales conditions as positive. Still, the component of the index looking at current sales prospects fell in the April report released last week.