71 percent of business leaders think Detroit is a good place to invest, according to a study by the Kresge Foundation. 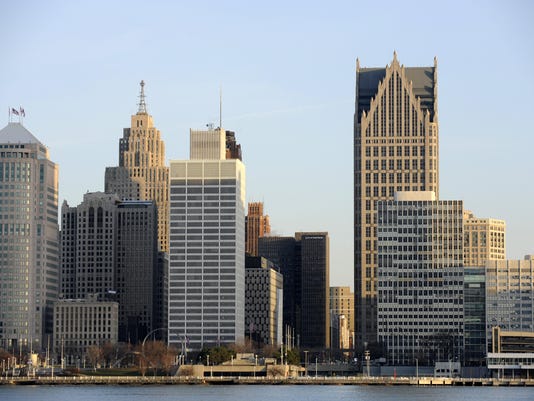 Seventy-one percent of business leaders think Detroit is a good place to invest in, but only 16 percent of them are aware the city is no longer in bankruptcy, according to a new study from the Kresge Foundation.(Photo: David Coates / The Detroit News)Buy Photo

Washington — Seventy-one percent of business leaders think Detroit is a good place to invest in, but only 16 percent of them are aware the city is no longer in bankruptcy, according to a new study from the Kresge Foundation.

The findings were included in a report called the Detroit Reinvestment Index that attempts to measure the city’s progress since emerging from bankruptcy in 2014 that was released on Tuesday.

Rip Rapson, president of the Troy-based Kresge Foundation, said the findings illustrate the challenges and opportunities that are facing Detroit as it attempts to nourish its embryonic comeback.

“I think it’s fair to say that business is very bullish on Detroit,” he said, nothing that the top characteristic business leaders that were polled used to describe Detroit is “a city in economic recovery.”

Rapson said the poll contained warnings that Detroit leaders still have work to do to improve the city’s image among business leaders after its bankruptcy made national headlines, however.

“Only 16 percent of business leaders outside of Detroit were aware that Detroit has actually emerged from bankruptcy,” he said. “News flash to America: We have.”

He noted that 80 percent of business leaders surveyed believed a city needs to have a low crime rate to attract investment, while only 52 percent of the poll’s believed Detroit’s handling of crime is “excellent or good.”

Rapson added that “there remains a significant gap between the importance business leaders place on the role of an effective local government and the creation of a sound municipal budget and what they perceive to be Detroit’s performance for each.”

“Obviously these are sobering findings, but they are not unexpected,” he said. “The city has made considerable progress on multiple measures of safety and is once again in the hands of responsive and competent municipal government, yet we continue to work in the shadow of a long period of political dysfunction and corroded municipal services.”

Sandy Baruah, president of the Detroit Regional Chamber of Commerce, said the Kresge Foundation’s findings show why it was important for Detroit to get bankruptcy behind it so the city could begin moving forward.

“If you’re in bankruptcy, it’s not exactly a great marketing opportunity for you,” he said.

Baruah said the economic problems that were being experienced by Detroit were so great that the benefits of entering bankruptcy outweighed the potential hit to the city’s national image, however.

“We had this ethos that there was really no more national news to be made with another negative story about Detroit,” Baruah said. “All the negative stories about Detroit had been told and retold and we kind of felt that we as a nation was suffering from what we called Detroit fatigue, so we said the way to solve Detroit’s PR problem was to actually start fundamentally solving Detroit’s problems.”

Baruah said bankruptcy was “part of a broader set of tools that were employed to kind of reformat and put the city on a trajectory to success.

“We’re not there yet,” he said. “There’s a lot of great interest in Detroit. If you talk to the mayor, talk to organizations like ours, you’ll hear stories of people kind of knocking on the door, wanting to come visit....We’re a little hesitant in some cases to tell the story, because in some cases one we’re not quite sure how it came together.

“Certainly it was very purposeful,” he continued. “But people ask me ‘what what your secret sauce? What was your magic strategy to get that done?’ Listen, if I knew that or if I had that answer, they would paying me a lot more money.”