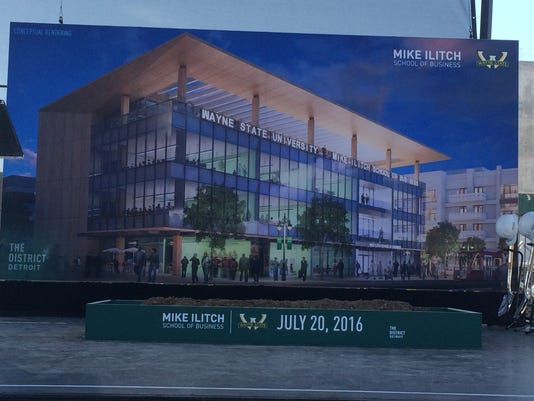 A rendering shows the Wayne State University Mike Ilitch School of Business, a state-of-the-art facility that will be next to the future Little Caesars Arena.(Photo: Ian Thibodeau, The Detroit News)Buy Photo

Construction begins this week on the Wayne State University Mike Ilitch School of Business, a state-of-the-art facility that will be next to the future Little Caesars Arena.

The possibility of building student housing near the new business school is still being explored.

The Wayne State business school and the Little Caesars Arena are part of the Ilitch family’s quest to transform 50 city blocks into dense, walkable areas filled with housing, retail, offices and entertainment. Many of those streets are now marked by vacant properties, some of which are owned by entities linked to the Ilitches’ Olympia Development of Michigan.

A groundbreaking takes place at 11:30 a.m. Wednesday at the site of the future Wayne State business school at the corner of Woodward and Temple.

The school is being made possible by a $40 million donation by Mike Ilitch and his family. It is the largest donation in the university’s history and one of the top 10 gifts in the country ever given to a public business school, according to Wayne State officials.

At the October announcement of the deal, Mike Ilitch called the business school “probably the biggest deal in my life.” He added: “I really do love the city so much. To see my name on that building, I feel like life is starting all over again.” 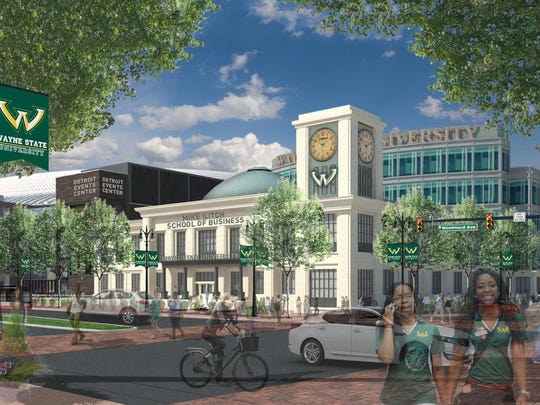 A rendering depicts the proposed business school, which would give Wayne State a major victory and shape the Ilitch family legacy. (Photo: Olympia Development of Michigan)

Mike Ilitch is owner of the Detroit Red Wings and Detroit Tigers. He and his wife, Marian, co-founded Little Caesars Pizza, which is now a global chain. Marian Ilitch owns the MotorCity Casino Hotel. They own and operate the Fox Theatre and several other downtown performance venues. Through various entities linked to their Olympia Development, the Ilitches control a sizable share of the land targeted for the planned 50 blocks of development. That overall plan is called District Detroit.

The 120,000-square-foot Mike Ilitch School of Business will serve more than 3,000 undergraduate and graduate students. The total project cost is $50 million. The university expects to raise additional money through gifts. Any remaining balance will be covered through a university bond issue. The school is expected to open new opportunities for students, with master’s degrees focusing on sports- and entertainment-related industries.

Officials hope classes will be offered at the new facility beginning January 2018. 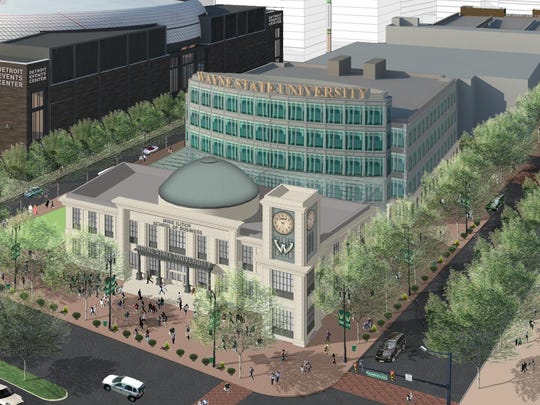 In the past, Olympia Development officials have talked about a potential development near the new school that would include student housing. Officials have not provided any recent updates.

Little Caesars Arena will be home ice for the Red Wings starting in the 2017-18 season.