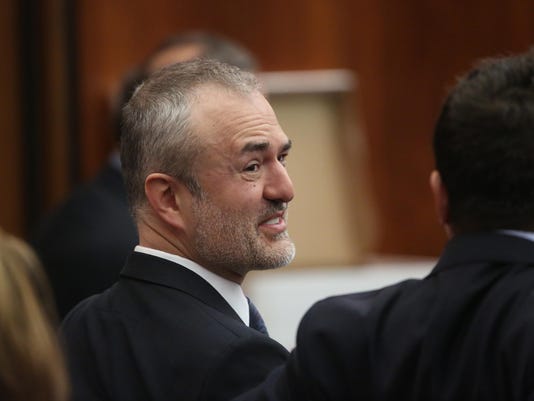 Nick Denton, founder of Gawker, talks with his legal team before Terry Bollea, aka Hulk Hogan, testifies in court during his trial against Gawker Media at the Pinellas County Courthouse on March 8, 2016 in St Petersburg, Florida.(Photo: John Pendygraft-Pool / Getty Images file photo)

Gawker Media founder Nick Denton lost his latest bid to halt enforcement of the $140 million verdict won by Hulk Hogan in an invasion-of-privacy lawsuit, according to a court document provided by the former pro wrestler’s attorney.

Florida Judge Pamela Campbell said Friday that she would let Hogan try to collect the jury award — in part because, she said, Denton misled her at a June 10 hearing about the value of his company stock.

Typically, the loser of a lawsuit has to turn over money or something valuable to the court while pursuing an appeal. Denton had told the court at the hearing that he would use stock in Gawker worth $81 million as security to guarantee payment of the jury verdict. But the media company had, just the day before, approved resolutions to put itself into bankruptcy, according to the court document.

Also, in May, a potential buyer had offered to make an opening bid of $90 million for the company’s assets, meaning Denton’s shares would be worth much less than what the court was told.

The judge said Denton hid “material information about the value of that stock which a reasonable person, under similar circumstances, should have disclosed.”

“I think the court really got this one wrong,” Denton said in a statement. “It was already widely reported that Gawker was putting in place a contingency plan to sell its websites. And the $81 million company valuation the court relied on was Hogan’s valuation.

“We told the court they did not know what the company’s shares would be worth, especially after it had been pummeled by Hogan and Thiel, but were willing to pledge all of them,” Denton added, referring to tech billionaire Peter Thiel, who helped finance Hogan’s lawsuit. “There was no misrepresentation.”

For now, Gawker’s bankruptcy in Manhattan federal court protects it from enforcement of the Hogan verdict.The federal judge refused to extend that shield to Denton, who would have to file his own bankruptcy to put the brakes on collection efforts against him personally.

A jury found that Denton and a former Gawker editor, A.J. Daulerio, invaded Hogan’s privacy by publishing video excerpts of the wrestler having sex with a friend’s wife.

Hogan’s attorney David Houston said Denton may try to get an appeals court in Florida to halt collection. If that effort fails, Hogan could file court papers by Monday in New York, where Denton’s assets are located, that will enable him to collect, Houston said.

While protected from Hogan in bankruptcy, Gawker plans to sell itself at a court-supervised auction. Ziff Davis has agreed to open with a $90 million bid and to keep Denton on if it wins. Under bankruptcy court rules, Hogan’s judgment would be treated as an unsecured claim against Gawker, meaning he stands to collect a share of the sale proceeds only after more senior creditors are paid in full.