From Dearborn malls to downtown stores, people were out on Thanksgiving looking for discounts 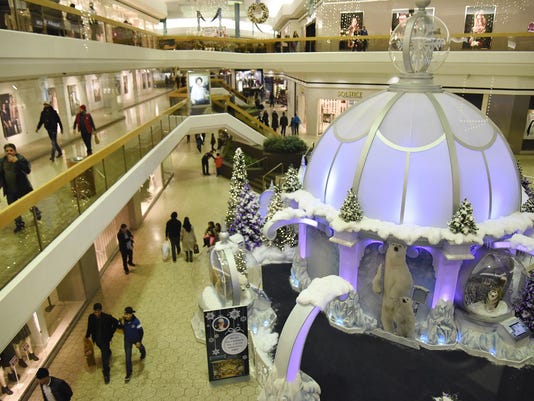 Along with feasts, racing between stores has become a Thanksgiving tradition for Nikki Bryant.

That’s why on Thursday, she spent hours after dinner with her mother seeking discounts on small gifts at Fairlane Town Center in Dearborn, joining crowds of families pushing strollers, lugging bags and snapping photos near glass storefronts.

“I like it better than waiting for Black Friday,” the Dearborn resident said while leaving an elevator at the mall. “I pretty much like the excitement.”

Scores of Metro Detroiters flocked to retailers searching for bargains across the region Thursday before and after their Thanksgiving feasts.

At the Meijer location near Eight Mile in Detroit, a steady stream of customers scanned the aisles early Thursday evening.

Some were seeking common items such as milk, rotisserie chicken and crackers and yet found marked-down prices on dolls, games, plush toys and other goods too enticing to ignore.

“All the toys are for kids!” Wyatt Waters, 9, of Detroit said while eyeing a bright orange Nerf Zombie Strike Flipfury Blaster with his older brother.

Others came specifically to seize goods at bargain rates.

“I was planning all day,” Tonya Christian said as she cradled a nearly four-foot-tall golden brown stuffed bear marked down more than $20 off its sticker price.

Though she already spotted deals online, the Detroiter insisted her son, daughter-in-law and grandson head to the store so they could find deals on socks, clothes and more.

“It’s nothing like coming out,” Christian said while her son flipped through a flier nearby. “I can’t pass up a deal. That’s just me.”

Surveys from the AAA Consumer Pulse and National Retail Federation show buyers still prefer Black Friday for bargain browsing. But a host of businesses, including Macy’s and Best Buy, offered deals on Turkey Day to draw customers from lavish dinners and football games.

The National Retail Federation estimates 137.4 million Americans plan to shop Thanksgiving weekend, with 21 percent of them shopping on the holiday, virtually the same as last year’s 22 percent.

The federation estimates that holiday sales could jump 3.7 percent to $630.5 billion, compared with last year’s 4.1 percent growth. The Michigan Retailers Association forecasts sales in the state climbing 2.1 percent compared with 2015.

Meijer has long stayed open on Thanksgiving — a boon since “people tend to forget those key items” for holiday spreads, spokesman Joe Hirschmugl said. “We have found over the past couple decades that our customers come to expect us to be open.”

Those same customers also anticipate many markdowns as they start preparing for Dec. 25, he added. “We’ve done everything we can to have as much in stock as possible. We’re doing our best to try and help our customers find those key Christmas gifts for loved ones.”

Several hundred awaited the opening of Macy’s and door-buster specials such as $7.99 toasters, $19.99 boots and $39.99 cashmere sweaters.

“The stores have a lot of good deals,” said Peggy Hayes, the mall’s marketing director. “The people are coming out and shopping. There’s a social experience with people that they like. It makes it a different experience than sitting at your computer.”

The excursion attracted Duaa Al Dalawi of Dearborn, her mother and brother as well as her grandmother, who recently arrived from Jordan.

“We had to explain the meaning of Black Friday, which is kind of weird in Arabic,” the 26-year-old Al Dalawi said while toting new shoes in a colorful bag.

Glen Smith, a former Metro Detroit resident, browsed at JCPenney with his wife and son after loading up at other stores. The family trekked in from Oklahoma for the Detroit Lions game. Part of their buying bonanza was designated to scoop up team gear, but also other reasons.

Shoppers only had a four-hour window to check out the Nike Community Store in downtown Detroit.

“It’s a really good thing,” said Song Yu, a Midtown Detroit resident, as he lifted a blue T-shirt. “There are a lot of discounts.”

Jeff Manker selected a new pair of black Nikes with his wife and 13-year-old son, who suggested stopping there while they were in town for the Detroit Lions game and Thanksgiving Day parade.

“We’ve never done it before,” the Traverse City resident said while standing in line near the cash register. “It’s going to be a long tradition.”