Trump being taken seriously at Davos, but not literally

Trump being taken seriously at Davos, but not literally 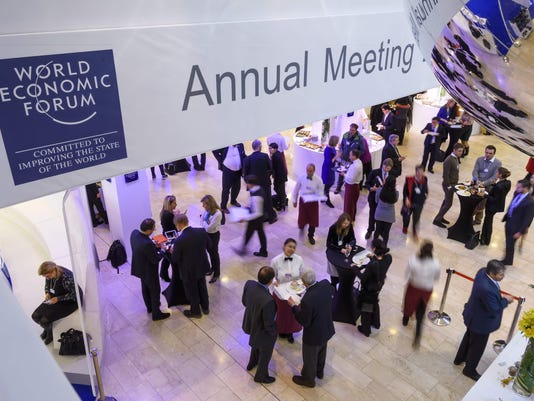 While the prevailing attitude in Davos is that Donald Trump is a pragmatist who will shun anti-business regulations, some attendees conceded that optimism is built, at least in part, on wishful thinking.(Photo: Fabrice Coffrini / Getty Images)

The word in Davos: Ignore the tweets. Executives gathered in the Swiss resort for the World Economic Forum this week keep repeating, like a soothing mantra, that Donald Trump is at heart a pragmatist who will avoid trade wars and regulations that make it harder to do business.

“What somebody’s saying is not necessarily what they’re going to do,” said David Cote, chief executive officer of Honeywell International Inc. He should hope so: Honeywell is a global manufacturing giant with far more employees outside the U.S. than in, and it has made major bets on projects like supplying parts for China’s first commercial jet.

With stock markets nearing record highs and business-friendly figures like billionaire investor Wilbur Ross named to the cabinet, a conviction has set in that a man who came to power as an anti-establishment populist might in fact usher in a golden age for business.

“In the end if he knows the facts; he’ll respond according to the facts,” said Hideaki Omiya, chairman of Mitsubishi Heavy Industries.

The stakes are high for companies that have prospered during the era of globalization, locating factories where labor’s cheap and finding suppliers that can offer components at the most competitive prices. Trump has criticized the arrangements that make those integrated operations possible, calling the North American Free Trade Agreement — which has allowed automakers like Ford Motor Co. to build supply chains spanning the length of the continent — a “disaster.” During his campaign, Trump blasted the multilateral economic and political order, saying China, the most important U.S. trading partner, had been allowed “to rape our country.”

Companies shouldn’t sweat the president’s “one-liners” and instead should focus on Trump’s cabinet nominees, said Jamie Dimon, CEO of JPMorgan Chase & Co. “I think that these very rational people will be very thoughtful when they go about the actual policy.”

Some political veterans say the Davos set is being naive. Larry Summers, a Treasury Secretary under President Bill Clinton, is puzzled by the shifting views on Trump and cautions against “enabling” the new administration.

“I’ve been very troubled by the attitude of business people from the U.S.,” Summers said. “People who were terribly afraid of what this would mean for America’s place in the world are now hailing those who surround Donald Trump as great geniuses.”

Phil Levy, a senior fellow at the Chicago Council on Global Affairs and adviser to former President George W. Bush, said executives shouldn’t entirely discount what Trump says. Past presidents, he notes, have been careful to avoid proclamations they don’t intend to stand behind.

The healthcare industry has a more delicate task than most in making its case to Trump. Earlier this month he accused drugmakers of “getting away with murder” through high prices, and broke with traditional Republican policy by suggesting the government could use its purchasing power to rein in costs. Drug makers, though, argue they need to charge what they do to reward the risks they face and to cover the cost of research.

One of them, Merck KGaA CEO Stefan Oschmann, said he’s “convinced that the U.S. is a market that values innovation.” Besides, he said, pharmaceutical companies employ thousands of highly paid researchers in cities like Boston and San Diego, “a huge share of the value chain of drug-making.”

Executives looking for ways to avoid confrontation with Trump will try to highlight those arguments, on the assumption that his main concern is U.S. economic growth and employment, rather than ideology. Winning his support may not take much: he took to Twitter to praise Wal-Mart Stores Inc. for a “big jobs push back into the U.S.” after the retailer announced 10,000 new positions that in fact represented a slowdown in growth plans compared with previous years.

“This is all about jobs in the U.S.,” said Novartis AG CEO Joe Jimenez. “That will be the True North, and everything else will follow that.”

The ultimate test of whether Trump implements his stated policies may be their impact on U.S. consumers, who’ve grown accustomed to cheap products made abroad. The U.S. in 2015 imported $2.2 trillion of goods and exported $1.5 trillion. The country ran trade deficits of $367 billion with China and $61 billion with Mexico, its largest and third-biggest trading partners, respectively.

There are already signs, however, that Trump is preparing for a wholesale overhaul of trade that goes well beyond rhetoric. He’s created a National Trade Council to advise him, picking Peter Navarro, a professor at the University of California at Irvine and a sharp China critic, to run it.

Some Davos attendees were prepared to concede that optimism about Trump is built, at least in part, on wishful thinking. “I don’t think anyone likes the unpredictability he brings to the table,” said Martin Eurnekian, a director at Buenos Aires-based conglomerate Corporacion America. “Everybody wants to believe,” he said, “that it’s mostly for show.”