The chocolate shop is moving to a historic building in Hamtramck 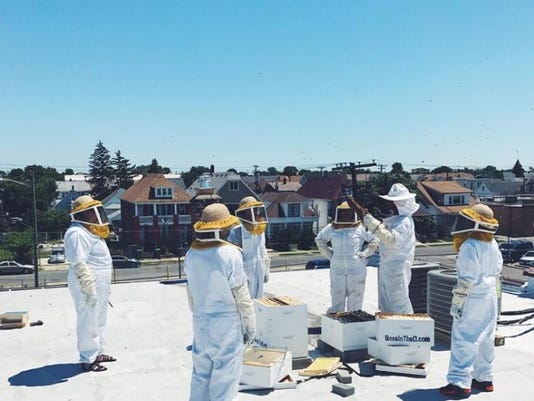 The Bon Bon Bon employees, known as the Babes Babes Babes, suited up to check out the honey bees located on the roof of the new shop in Hamtramck. The nonprofit Bees in the D partnered with Bon Bon Bon to produce honey that will be used for the chocolates.(Photo: Bees in the D)

The chocolate shop is opening a bigger factory and shop in Hamtramck on its third birthday, July 19. Founding Chocolatier Alex Clark is especially proud that her new 6,000-square-foot space is a historic building on Jos. Campau.

She said a fire swept through the building in 1966, damaging the walls and floors. The building remained ravaged for decades until Clark started restoring it a year ago. As a tribute to its past, she kept certain remnants, like a wall that bears the fire’s destruction.

The 29-year-old Hamtramck resident unearthed pieces of history while renovating the first and second floors.

“We found a newspaper article in the wall that recorded 47 or 48 people being arrested in the upstairs of our building. That part is pretty crazy,” she said, guessing the building was once a speakeasy. “A lot of people’s grandparents have stories about this building and being here to gamble.”

“She sees what I and so many others see in Hamtramck: a vibrant, diverse and quirky little city with opportunity to experiment, to take a chance on a dream, and to become part of a true community in the process,” Majewski said. “Alex sets an example for others who are looking for opportunity, and she proves that that opportunity exists in Hamtramck.”

Bon Bon Bon’s enlarged production space, which is 10 times bigger than the original shop, will present new opportunities to handcraft the Bons that come in rotating flavors. Fan favorites like Better Butter Crunch (Better Made potato chips with milk chocolate and sea salt) and Birthday Cake (birthday cake ganache, buttercream frosting and sprinkles) are usually constants on the menu.

“It does allow us to use different techniques we couldn’t do before because we didn’t have the space to house the equipment,” Clark said. “So rather than making more Bons, it lets us make higher quality Bons and be more creative than we were before.”

Clark has also expanded the number of employees, known as the Babes Babes Babes, to 16 and will offer a new e-commerce option to “shop bonline.”

Another bonus Clark is excited about: They can now grow produce, such as herbs and fruits, on the roof.

“There’s nothing better to a chocolatier than being able to run outside and pick whatever you need,” Clark said.

Besides the plants, Clark partnered with the nonprofit Bees in the D to install two beehives on the roof. The honey will be incorporated in the Bons.

Bees in the D founder Brian Peterson, 42, has installed hives for other Detroit businesses like Detroit City Distillery and gardens like Detroit Abloom. When not tending to his 28 hives in southeast Michigan, he teaches fifth-graders at Musson Elementary in Rochester Hills.

The goal is to educate others about the conservation of honey bees, which are declining in numbers, he said. Last week he took a few Babes Babes Babes on the roof for a tour.

“(We) suited them up and gave them a look at the world of the honey bee to help educate and stifle some of those fears that people have about honey bees, because they get mistaken for a lot of the more aggressive bees like wasps,” he said.

While the honey will make the chocolate that much sweeter, Peterson said it gives the product an extra Detroit-made flair.

“The honey is actually from Detroit,” he said. “The bees go about a 2-mile radius, so they’re also going into Detroit to get some of their nectar. So how cool to use those extremely fresh and local resources.”

Clark, a Michigan State University graduate in hospitality and food science, is a 2016 Forbes 30 Under 30 Food and Drink winner and Martha Stewart American Made Award finalist.

Since she launched her dream chocolate shop, customers have gone bonkers over her $3 Bons. And though Clark has held pop-ups in New York and introduced her creations to sweet tooths internationally, she can’t imagine running Bon Bon Bon anywhere but Hamtramck.

“It’s amazing to be a chocolatier in a community that is the most diverse community in the state culturally,” she said. “Making chocolate here is a nonnegotiable thing. Not only do we have amazing neighbors, but as a chocolate shop, I don’t think we could find a more inspiring place to be.”

Bon Bon Bon, which also has downtown Detroit location on Fort Street, will be open six days a week. Hours will be announced soon.