There are limits to how much smaller airline seats can get 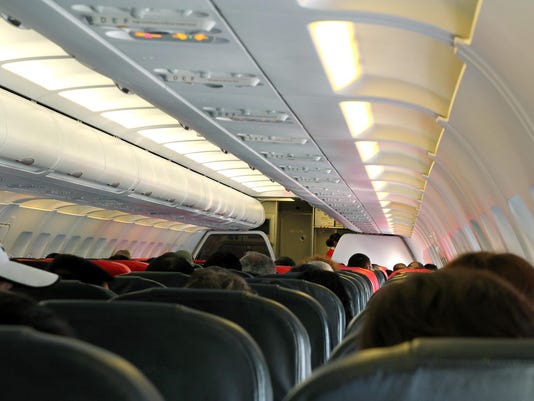 Every so often, officials at Rockwell Collins Inc. pitch a one-day job offer to residents near its Winston-Salem, N.C. design center: Earn $100 for sitting in an airplane seat for eight hours.

Show up for the gig, and there’s nary a drinks cart or flight attendant in sight. The rows of seats are arrayed in a testing area at the company’s design and engineering complex. Even without engine hum or overhead bins, “it’s kind of like they’re on the plane,” says Alex Pozzi, vice president of research and development at the company’s campus here.

Over the years, seat researchers at B/E Aerospace, which Rockwell acquired in April for $8 billion, have gleaned a few insights about life in the air. Most people are just fine for two hours. As the third hour approaches, stiffness increases and comfort declines. At four hours, however, a sort of derierre detente is achieved, and the levels of discomfort recede. After all, when you’re stuck inside a sealed, speeding tube at 35,000 feet, resistance is truly futile.

There are many reasons to despise flying, from delays, to fees, to overzealous TSA staff. But shrinking seats and the pain, claustrophobia, and rage they can trigger are arguably the biggest reason why travelers loathe airlines. The modern seat, with its power to pack more customers onto any given plane, is at the very heart of the industry’s 21st-century economics. Slimmer seats and less legroom between rows known as pitch has enabled “cabin densification” across domestic and international fleets. More seats, quite simply, means more money and lower operating costs.

There are limits, however, even beyond physical constraints. Regulators mandate a certain ratio of attendants to seats, and carriers want to keep labor costs down. Still, the trend has clearly been moving towards crunching you. While 34 to 35 inches of pitch was once common for economy class, the new normal is 30 to 31 inches, with several major carriers deploying 28 inches on short and medium flights. Soon, however, that squeeze-play may come to an end.

The seat factory in Winston-Salem is at the center of testing the physical limits of human tolerance. One part of its live studies involves giving only some participants Wi-Fi access, an exercise that typically reveals a direct relationship between distraction and seat-staying power. “You can easily see the difference in ratings for the exact same seat if you have entertainment,” says Pozzi.

In recent years, the “slimline” seat has become the de facto standard by which airlines outfit economy cabins. This design is inches thinner than predecessors and markedly lighter, allowing carriers an additional cost-saver by reducing weight and thus fuel burn. Today, an economy seat that tips the scales above 20 pounds is, by an airline’s measure, too heavy to fly.

Carriers are “segmenting the economy cabin into two or three buckets,” said John Heimlich, chief economist at Airlines for America, the industry’s U.S. trade group. These efforts help “to minimize the market-share loss to ultra low-cost carriers or to other modes of transport.”

When Boeing Co. introduced the twin-aisle 777 in the mid-1990s, a nine-seat breadth was standard. Now, the aircraft flown by carriers worldwide often seats 10 across in economy, making life even more miserable for passengers. Boeing’s 787 Dreamliner has become notorious for its economy-class pinch with nine across-seating and on some 787s, these seats are only 17 inches wide. (Airbus’s new A350is also typically configured with nine seats across, but its cabin is about four feet wider, so it could fit 10.)

This cabin squeeze and seat-shrinking has helped increase earnings in an industry that’s gotten used to fiscal stability. But it occasionally results in some bad public relations. Two United passengers got into a kerfuffle in the summer of 2014 when a man stuck a “knee defender” device on the seat in front of him to prevent reclining, causing the seat’s occupant to grow irate. The crew diverted the Denver-bound flight to Chicago to eject both combatants.

In early May, news leaked that the world’s largest airline, American Airlines Group Inc., planned to add three rows of seats separated by only 29 inches of pitch on its new fleet of Boeing 737 Max, which arrives later this year. That arrangement would allow for an additional row of extra-legroom seats, which American calls main cabin extra, between first class and steerage. The move would have broken the current 30-inch pitch limit among the six-biggest U.S. airlines, putting it closer to no-frills carriers such as Spirit Airlines Inc., which offers a mere 28 inches.

Less than six weeks later, American reversed course not because of passenger outrage, but because of flight attendants. American Chief Executive Officer Doug Parker said on July 28 that employees pushed back at having to be the front-line defender of a new level of cabin-class stratification. Parker said employees were telling him, “You’re going to put us in a position where we need to explain to these customers that indeed this is necessary so that we can have one more row of main cabin extra?’ ”

No airline has yet edged below 28-inches of legroom, although at least one major seat manufacturer, Zodiac Aerospace, has shown a prototype designed with just 27 inches.

This rush to squeeze ever-more money out of passenger posture may soon slow. Carriers such as Delta Air Lines Inc. are looking to exploit this issue by retaining some creature comforts its competitors have ditched. It’s kept nine-across seating on its 777s, “one of the only in the world” to do so, says Joe Kiely, Delta’s managing director of product and customer experience. Delta has also led an industry trend to fly larger aircraft on more routes, reducing the role of regional jets. JetBlue Airways Corp. took pitch into consideration for its Airbus A320 fleet, which will see legroom shrink by more than an inch, to 32 inches, starting this fall. Despite the contraction, JetBlue wanted still to be able to advertise “the most legroom in coach.”

Flyers Rights, a nonprofit group, contends that seat space has shrunk at the same time passengers have gotten larger. Those developments could lead to a catastrophic outcome during evacuation, the group warns. It also points to a less dramatic peril exacerbated by tight quarters and longer flights: deep-vein thrombosis, or blood clots in the leg, which can kill.

“Our concern is that it will take a Titanic-type disaster to make a change if we don’t get regulation,”says Paul Hudson, the group’s president. The court decision may “give impetus to getting seats back to where they’re going to be both safe and potentially not unhealthy.”