On social media, not all speech is free

On social media, not all speech is free

Jahmel Binion reached settlements with some who made comments about him.(Photo: Todd McInturf / The Detroit News)Buy Photo

Got a neat photo you want to post on Instagram? Can’t wait to share a joke about someone on your Facebook page? Angry over a botched brake job and anxious to spout off about it?

“I was just shocked,” Binion, 26, said about the posting, which included photos of him and offensive remarks about him. Binion, a Macomb County resident and business owner, said he sought psychological counseling after the incident.

Binion’s attorney, John Henke III, said while people may think they are covered by the First Amendment’s free speech clause when they post online, that right isn’t absolute.

Recently, another man posted a video of Binion on YouTube and Instagram making remarks about Binion’s facial features. Henke says the posts just “won’t go away.” He and Binion haven’t decided whether they will file a lawsuit against the man.

Attorneys who handle libel and slander cases say they’re noticing an uptick in lawsuits, and they say at least part of the trend stems from the freedom social media users feel to express themselves online.

“People think they are protected when they’re really not,” said Mike Weaver, an attorney with the Plunkett Cooney law firm in Bloomfield Hills.

A Google image search of Jahmel Binion shows the Metro Detroit man and former basketball player Shaquille O’Neal, who made comments about his appearance. (Photo: Todd McInturf / The Detroit News)

Three years ago, the internet was abuzz with a report about legendary singer Aretha Franklin allegedly beating up singer Patti LaBelle.

The story was not true and Franklin threatened a lawsuit after her lawyer, high-profile attorney Arnold Reed, sent a “cease and desist” letter to the website that allegedly published the information, NewsNerd.

In the Franklin case, Reed said the satire depicted Franklin as “dissing” LaBelle during a concert at the White House in 2014.

“All the tabloids came out and said Aretha Franklin dissed Patti LaBelle and said she had a fight,” said Reed. “We were contemplating (litigation). (Just) because it’s a public figure, you don’t have a right. It doesn’t give you a license to report it under the guise of public figure. It doesn’t mean you have a right to say things that are completely off the wall and place her in a bad light.”

Reed said getting NewsNerd to cooperate was a “tough row to hoe” but that the satire site took down the article and reposted it with a disclaimer labeling it as satire. Efforts to reach NewsNerd were unsuccessful. 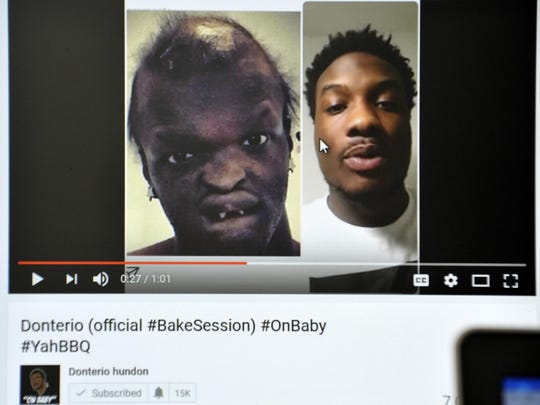 Jahmel Binion, left, has been the subject of ridicule on YouTube. (Photo: Todd McInturf / The Detroit News)

“For a public figure, you have to prove it was done with recklessness and malice,” said Reed. “The standard is so, so high.”

Weaver said public figures must show “actual malice” when they seek restitution for a damaging remark or review online.

It is important, said Weaver, to note that Facebook, Google and other search engines will turn over sensitive information if forced to during an investigation.

“First, many people don’t understand that they can be sued for what they post on social media. ... Many people are under the incorrect impression that the First Amendment allows them to say whatever they want,” he said.

“Second, the huge verdict that Hulk Hogan received in his privacy lawsuit against Gawker has led some potential plaintiffs and lawyers to think that these may be get-rich-quick cases. But the First Amendment protections remain very strong and these cases are generally hard for plaintiffs to win, particularly on appeal.”

In Hogan’s case, a jury awarded the wrestling legend $140.1 million last year after Gawker Media published a sex tape with footage of him. 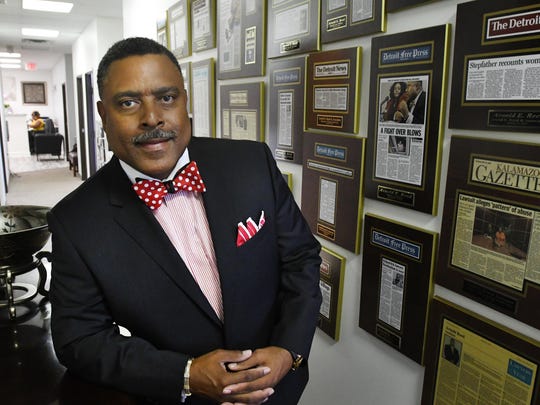 Attorney Arnold E. Reed, who has offices in Southfield, wrote a cease and desist letter to a satire site about a story on Aretha Franklin. (Photo: Daniel Mears / The Detroit News)

The question of what speech is protected under the First Amendment also is at the center of a lawsuit filed against a well-known metro Detroit pathologist, Dr. Werner Spitz.

Burke Ramsey filed a lawsuit against Spitz in Wayne County Circuit Court for $150 million for comments he made about the 1996 slaying of the 6-year-old Colorado beauty queen.

The lifeless body of the child was found in the basement of the family’s Boulder, Colorado, home Dec, 26, 1996. Investigators say she had been tortured, sexually assaulted and strangled.

Ramsey, who was 9 at the time of his sister’s slaying, says in his lawsuit that Spitz, 90, gave an interview to CBS Detroit radio last September in which he “explicitly and falsely” stated Burke, who now lives in Charlevoix, murdered his sister.

The suit, filed by Plymouth attorney John Lesko, quotes Spitz as saying: “If you really, really use your free time to think about the case, you cannot come to a different conclusion. ... It’s the boy who did it.”

The Ramseys’ family attorney, Atlanta-based lawyer L. Lin Wood, told The Detroit News: “The accusations by Werner Spitz against this young man are outrageous. Such false accusations for self-promotion and profit have no place in an orderly and just society. This lawsuit is the first step to holding Spitz fully accountable for his heinous wrongdoing.”

The suit against Spitz is pending.

Last month, a Dallas-area couple found out the hard way that harsh words written online can come back to haunt you.

In their case, a Texas jury awarded their wedding photographer more than $1 million after the newly married couple launched a social media crusade against her, accusing her of “holding their pictures hostage” and demanding extra fees before releasing the images.

The jury in Dallas County found that negative posts about Andrea Polito amounted to defamation and that the couple acted out of malice in making comments about Polito following their October 2014 nuptials.

Polito said in her lawsuit that the couple, Neely Moldovan and her husband, Andrew, were interviewed by a Dallas news station and later publicized the story on social media and other media platforms.

“Nobody is challenging your right to post a review or your free speech rights but with those rights come consequences,” Wishnew said. “And in our case we had malicious intent.”