The Village Voice was the country’s first alternative newsweekly 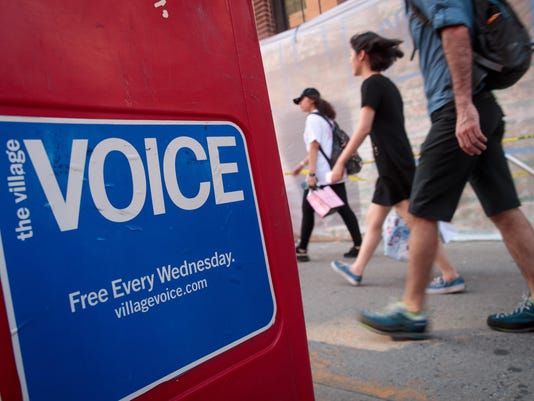 NEW YORK, NY - AUGUST 22: People pass by a Village Voice newspaper stand in the East Village neighborhood in Manhattan, August 22, 2017. The Village Voice, one of the oldest and most well-known of the alternative weekly newspapers, announced today that it will no longer publish a print edition. The publication will maintain a continued online and digital presence. (Photo by Drew Angerer/Getty Images)(Photo: Drew Angerer / Getty Images)

New York — The Village Voice, the alternative weekly newspaper that has been a mainstay on the city’s street corners for decades, is going digital only and will no longer appear in print.

Owner Peter Barbey announced the change on Tuesday. He said the newspaper, founded in 1955 by a group of writers including novelist Norman Mailer, “has been a beacon for progress and a literal voice for thousands of people whose identities, opinions and ideas might otherwise have been unheard.”

Barbey said he expects that to continue, with reporting and stories posted on the Voice website.

The Village Voice was the country’s first alternative newsweekly. In its prime, it was both popular, with a free circulation of 250,000, and groundbreaking. It covered the gay rights movement from its earliest moments. It was a fertile outlet for some of the city’s better investigative journalists. Its staffers have won three Pulitzer Prizes: awards for editorial cartooning and feature writing in the 1980s and an award for international reporting in 2000 for a series on AIDS in Africa. It has been celebrated for its arts and culture coverage.

Like other newspapers, though, it has faced a challenging financial environment as traditional print ads, especially classifieds, migrated to the internet. It became a free newspaper in 1996 in an attempt to stem circulation losses.

Barbey, the president of The Reading Eagle newspaper in Pennsylvania, bought the Voice in 2015.

“The most powerful thing about The Voice wasn’t that it was printed on newsprint or that it came out every week,” Barbey said in a statement. “It was that The Village Voice was alive, and that it changed in step with and reflected the times and the ever-evolving world around it.

“I want The Village Voice brand to represent that for a new generation of people — and for generations to come.”