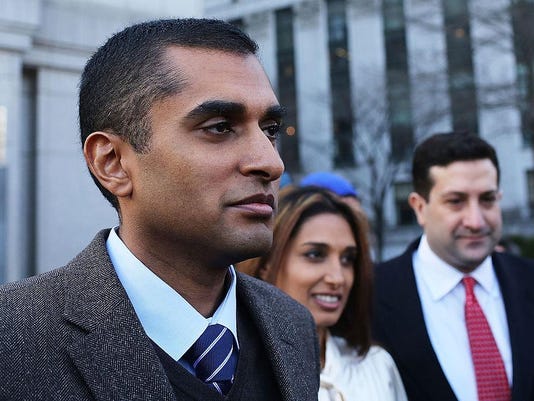 Mathew Martoma, left, walks with his wife Rosemary and his lawyer after leaving Manhattan federal court, following his arraignment on insider-trading charges on January 3, 2013 in New York City. The conviction of an Ivy League-educated ex-portfolio manager accused of engineering the most lucrative insider trading scheme of all time while working for billionaire Steven A. Cohen was upheld Wednesday by a divided federal appeals court.(Photo: Spencer Platt / Getty Images file)

New York — The conviction of an Ivy League-educated ex-portfolio manager accused of engineering the most lucrative insider trading scheme of all time while working for billionaire Steven A. Cohen was upheld Wednesday by a divided federal appeals court.

The 2nd U.S. Circuit Court of Appeals voted 2-to-1 to let stand the 2014 conviction of Mathew Martoma. Prosecutors say the 43-year-old Boca Raton, Florida, resident earned over a quarter-billion dollars illegally by cozying up to a University of Michigan Medical School professor with access as one of the world’s top Alzheimer’s experts to the secret results of pioneering drug tests.

In a majority opinion written by Chief Judge Robert A. Katzmann, the 2nd Circuit said information Martoma obtained early about drug tests results in the summer of 2008 enabled Martoma and Cohen to trade in the securities of drug companies, earning $80.3 million in profits and averting losses of $194.6 million for the Stamford, Connecticut-based SAC Capital Advisors. Martoma, the court noted, received a $9 million bonus based largely on those trades while the doctor received substantial financial benefits in return.

The 2nd Circuit said the jury that convicted Martoma was instructed on the law sufficiently to convict him even when the case is judged against recent rulings by the 2nd Circuit and the U.S. Supreme Court in insider trading cases that further defined the law.

The appeals court rejected arguments by Martoma’s lawyers that a new trial should be ordered because he and Dr. Sidney Gilman, who no longer works at the University of Michigan, didn’t have the kind of meaningfully close personal relationship required by law or because jury instructions did not adequately explain the limitations on the “personal benefit” Gilman must have received for it to be insider trading.

The 2nd Circuit also concluded that its ruling in an earlier insider trading case requiring a “meaningfully close personal relationship” between a tipper and a tippee was “no longer good law.”

In a dissent, Circuit Judge Rosemary Pooler said the jury in Martoma’s case was improperly instructed on the law. She said the majority opinion pushes insider trading law too far by finding that an insider receives a personal benefit when giving inside information as a “gift” to any person.

“What counts as a ‘gift’ is vague and subjective,” she wrote. “Juries, and, more dangerously, prosecutors, can now seize on this vagueness and subjectivity. The result will be liability in many cases where it could not previously lie.”

Martoma, who studied at Duke University, Stanford University Graduate School of Business and Harvard Law School, is serving a nine-year prison sentence after his conviction on securities fraud and conspiracy charges in what prosecutors described as a record insider trading scheme. He’s scheduled for release from a Miami lockup in 2021.

SAC Capital pleaded guilty in 2013 to fraud charges and agreed to pay $1.8 billion to settle charges that it allowed, if not encouraged, insider trading for over a decade. Cohen has disputed the allegations involving his company.