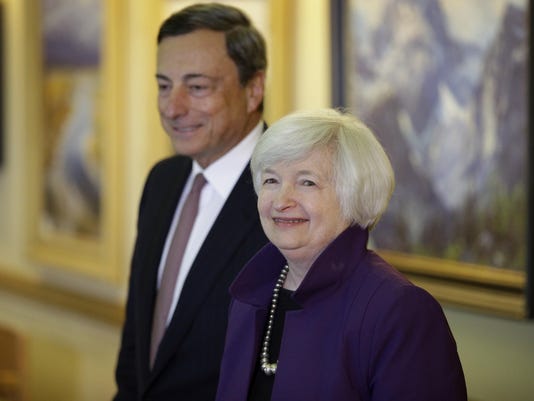 Yellen said the Fed is prepared to adjust the regulations as needed to help financial institutions. But in a speech to an annual conference of central bankers in Jackson Hole, she implicitly rejected efforts by Republicans, including President Donald Trump, to scrap the 2010 Dodd-Frank law as a threat to the economy.

The Fed chair refrained from remarking on the state of the economy or on the possible future course of interest rates. Investors had been awaiting her speech for any signals about what the Fed might do when it meets next month. The central bank has been gradually raising its benchmark short-term rate, but most Fed watchers expect no rate hike before December at the earliest.

Overhanging Yellen’s speech was the possibility that it marks her final appearance in Jackson Hole as Fed chair. Her term as chair will end in February, and Trump has made clear he is considering replacing her. One candidate he has mentioned is Gary Cohn, a former Goldman Sachs senior executive who leads Trump’s National Economic Council.

Some saw Yellen’s forceful defense Friday of the regulatory structure imposed on banks since the 2008 crisis as further lessening the likelihood that Trump will reappoint her.

Sal Guatieri, senior economist at BMO Capital Markets, said Yellen’s speech “puts her at odds with Trump’s deregulation mandate, which could weigh against her remaining as chair when her term expires early next year.”

Paul Ashworth, chief U.S. economist at Capital Economics, said that “Yellen’s passionate defense of the post-crisis tightening of financial regulation isn’t going to go down particularly well at the White House” and that it probably makes it less likely that Trump will re-nominate her.

At the same time, tensions might be arising between Cohn and Trump. In an interview published Friday in the Financial Times, Cohn said he considered quitting the White House over the president’s widely condemned response to violence at a white nationalist rally in Charlottesville, Virginia. Cohn said he ultimately chose not to leave because of the duty he feels to his job.

In her speech, Yellen noted that the U.S. and global financial systems were “in a dangerous place 10 years ago,” with severe strains that led to the collapse of investment bank Lehman Brothers, the government takeover of mortgage giants Fannie Mae and Freddie Mac and the requirement that taxpayers bail out the largest banks.

The Fed chair pointed out that despite all the government support to banks, the downturn devolved into the Great Recession, with the loss of 9 million U.S. jobs and millions of Americans losing homes to foreclosures. She said that the resulting recovery has been painfully slow and that policymakers have had to devise ways to prevent another financial crisis.

Yellen said the Dodd-Frank Act has produced a far safer banking system, especially with banks required to hold much higher levels of capital, the cushion against losses from bad loans.

“The United States, through coordinated regulatory action and legislation, moved very rapidly to begin to reform our financial system,” Yellen said, “and the speed with which our banking system returned to health provides evidence of the effectiveness of that strategy.”

In addition to higher capital requirements, Yellen said the financial system has been fortified by regulations requiring that the biggest banks undergo annual stress tests to ensure that they have enough capital to withstand any future severe downturn.

She said the Fed is open to modifying current regulations, especially to ease restrictions on smaller banks that didn’t contribute to the 2008 crisis. She also suggested that the so-called Volcker Rule, which limits the ability of banks to trade their own investments, might need to be modified.

Yellen said that in all, the tighter regulations, far from stifling economic growth, had actually helped the economy in part by making the financial system safer.

“Our more resilient financial system is better prepared to absorb, rather than amplify, adverse shocks, as has been illustrated during periods of market turbulence in recent years,” she said.

Republicans have long opposed the 2010 Dodd-Frank law, which was enacted by Democrats in Congress with the support of President Barack Obama. During last year’s campaign, Trump called the 2010 law a “disaster” that had held back lending, hiring and the overall economy.

He promised early in his presidency to do “a big number” on it. Trump has named officials to key posts in regulatory agencies who would be expected to carry out his deregulatory effort. He has, for example, nominated Randal Quarles to the key post of Fed vice chairman for bank supervision. Quarles has been critical of certain aspects of Dodd-Frank.

The Republican-led House has passed legislation that would overturn many of the Dodd-Frank provisions. The legislation has not advanced in the Senate, however.