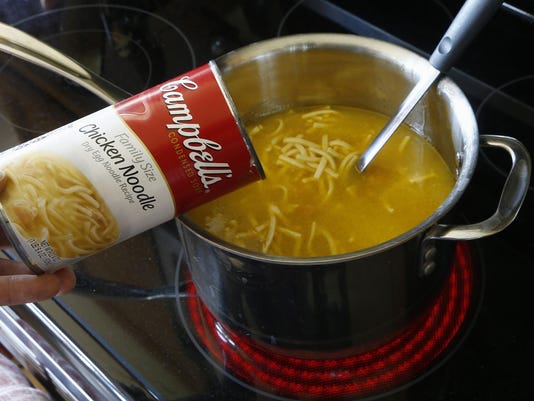 Camden, N.J. — Campbell Soup Co. said Thursday that it expects sales to keep falling over the next year as more people skip its canned soups and bottled juices in favor of fresher foods.

Packaged food companies have been hurting as consumer tastes change. Morrison said more people are shopping in the produce section and not picking up its unrefrigerated V8 juices and canned soup. She also blamed falling sales on the rising number of stores with private food brands and the growth of ready-to-cook meal delivery companies.

At Campbell’s soup and juice division sales fell 3 percent in the three months that ended July 30 from the same period a year ago.

Sales at its biscuits and snacks business unit, which includes Pepperidge Farm cookies and Goldfish crackers, were flat from a year ago. And sales at its fresh food unit, which makes Bolthouse Farms carrots, salad dressings and cold drinks, rose 1 percent.

Overall, the company reported fiscal fourth-quarter net income of $318 million, $1.04 per share, after reporting a loss in the same period a year earlier. Earnings adjusted for non-recurring gains were 52 cents per share, missing Wall Street expectations by 3 cents, according to Zacks Investment Research.

The Camden, New Jersey-based company said revenue fell 1.4 percent to $1.66 billion, falling short of the $1.69 billion analysts expected. For the year, the company reported profit of $887 million, or $2.89 per share. Revenue was reported as $7.89 billion.

Campbell expects full-year earnings in the range of $3.04 to $3.11 per share, and for revenue to fall as much as 2 percent from the year before.