The airlines, however, seem to be losing track of fewer bags, and consumer complaints are down from a year ago 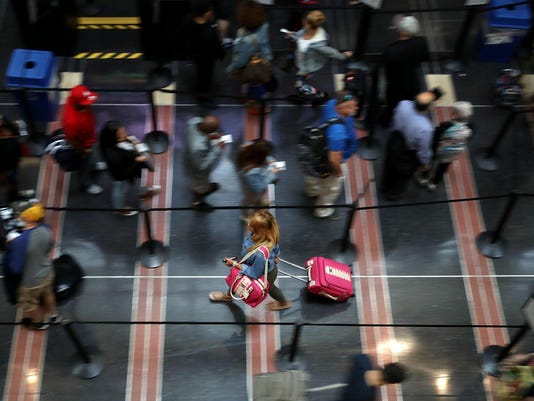 The U.S. Transportation Department said Tuesday that the dozen airlines covered in its monthly air travel consumer report canceled 2.2 percent of their flights, up from 1.4 percent in August of last year.(Photo: Chip Somodevilla / Getty Images)

Washington — Partly because of Hurricane Harvey, which shut down both major Houston airports for several days, canceled flights surged and delays increased on U.S. airlines in August.

The airlines, however, seem to be losing track of fewer bags, and consumer complaints are down from a year ago.

The U.S. Transportation Department said Tuesday that the dozen airlines covered in its monthly air travel consumer report canceled 2.2 percent of their flights, up from 1.4 percent in August of last year.

The department said that 77.1 percent of domestic flights arrived on time, down from 77.6 percent in August 2016. The government counts a flight on time if it arrives within 14 minutes of schedule.

Hawaiian Airlines had the best rating among the 12 largest U.S. airlines, with 93 percent of its flights on time. The airline benefits from often-favorable weather and many short flights among the islands in its home state.

Virgin America had the worst rate, followed closely by JetBlue Airways. Both carriers were late more than 30 percent of the time.

Nine domestic flights and two international flights were stuck on the ground so long that the airlines involved could be fined. The department said it was investigating all 11 incidents.

Fewer bags were lost, stolen or damaged. The department said there were 2.45 mishandled bags for every 1,000 passengers, down from the 3.15 rate in August 2016.

The Transportation Department said it received 1,220 consumer complaints about U.S. airlines, down from 1,603 a year earlier.

The airlines reported three deaths and one injury to animals carried on their planes.