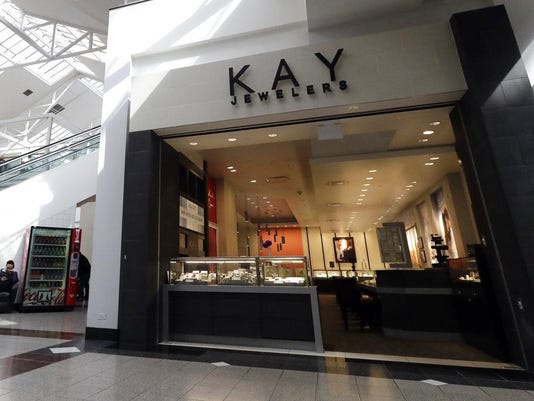 A Kay Jewelers store is seen in Lincolnwood, Ill., Wednesday, March 14, 2018. Signet Jewelers Ltd. will close more than 200 stores and expects a profit slump in 2019 as it faces an increasingly tough market for its Kay and Jared stores. The U.S. economy is beginning the year with a downshift in growth despite $1.5 trillion in tax cuts signed by President Donald Trump in December.(Photo: Nam Y. Huh / AP)

The U.S. economy is beginning the year with a downshift in growth despite $1.5 trillion in tax cuts signed by President Donald Trump in December.

Unexpectedly weak February retail sales pushed down forecasts for the annualized pace of expansion in the first quarter, with the Federal Reserve Bank of Atlanta’s GDPNow tracking estimate at 1.8 percent on Friday, cut from 2.5 percent a week earlier. Economists at Goldman Sachs Group Inc., JPMorgan Chase & Co., Morgan Stanley and Moody’s Analytics all lowered their estimates to 2 percent or less this week.

While strong job gains, rising industrial production and elevated consumer confidence indicate underlying health, the data as a whole suggest the tax cuts haven’t had a major impact yet. With Americans starting to enjoy fatter paychecks, though, most economists see the sluggishness as temporary, blaming it on factors including inclement weather, delays in tax refunds and consumers taking a break after a late-2017 spending spree tied partly to post-hurricane rebuilding.

“There has been a general downward drift and the quarter is looking a little softer than expected,” said Ethan Harris, head of global economics research at Bank of America Merrill Lynch in New York. “The effects of the tax cuts build very slowly as the year unfolds. We need more time for the fiscal stimulus to show up.”

Most of the tax changes — such a cut in the corporate rate to 21 percent from 35 percent — took effect on Jan. 1.

The Atlanta Fed’s tracking estimate, which is closely followed on Wall Street, has plunged from 5.4 percent on Feb. 1, a forecast highlighted at the time on Twitter by Trump supporters including Anthony Scaramucci, who briefly served as White House communications director. Kevin Hassett, chairman of Trump’s Council of Economic Advisers, has also praised the accuracy of the bank’s tracker of gross domestic product.

Economists at the regional Fed bank say the estimates early in the quarter aren’t meant to be taken as forecasts but as part of a mathematical model where the impact of various reports can be dissected, leading to a final forecast that is close to the government’s initial GDP reading.

If GDP expands in the January-March period at a pace slower than the previous quarter’s 2.5 percent, it would mark the third year in a row that the economy is beginning the year with softer growth. One explanation is so-called residual seasonality, or quirks in the data that the government is trying to address. In three of the past four years, the first quarter has been the weakest of all quarters.

“Don’t lose sleep over it,” said Ryan Sweet, director of Real-Time Economics at Moody’s Analytics, which cut its estimate of first-quarter growth to 1.7 percent from 2.4 percent. “Growth in the second half of 2017 was juiced by hurricane rebuilding and replacement demand for vehicles.”

This quarter nonetheless is shaping up as a disappointment for the Trump administration, which has hailed a new era of growth after the president signed the tax overhaul. Ninety percent of workers are getting an increase in their take-home pay, Treasury Secretary Steven Mnuchin estimated, after employers started withholding less money starting in February.

Forecasts compiled by Bloomberg show economists remain optimistic on growth for the full year. While the median estimate of analysts for first-quarter expansion has declined to 2.5 percent this month from 2.7 percent in February, the full-year projection has edged up to 2.8 percent from 2.7 percent.

Fed officials agree the outlook is relatively bright, even if they don’t share the White House’s view that 3 percent growth is sustainable. Jerome Powell, the central bank’s new chairman, told Congress this month the economy was “strong” and tax cuts would add “meaningfully to growth.” Economists predict an interest-rate hike on March 21, and are split on whether the Fed will raise three or four times this year.

A 2 percent quarter would be just shy of the 2.2 percent average growth since the recession ended in 2009, and in line with the Fed’s long-term growth estimates.

A report Friday showed consumer sentiment jumped to a 14-year high in March after tax cuts boosted disposable incomes, and the current conditions gauge was the highest in data back to 1946, according to the University of Michigan’s regular survey. But the expectations measure dropped, reflecting some concerns that Trump’s tariffs on imported steel and aluminum could hurt growth.