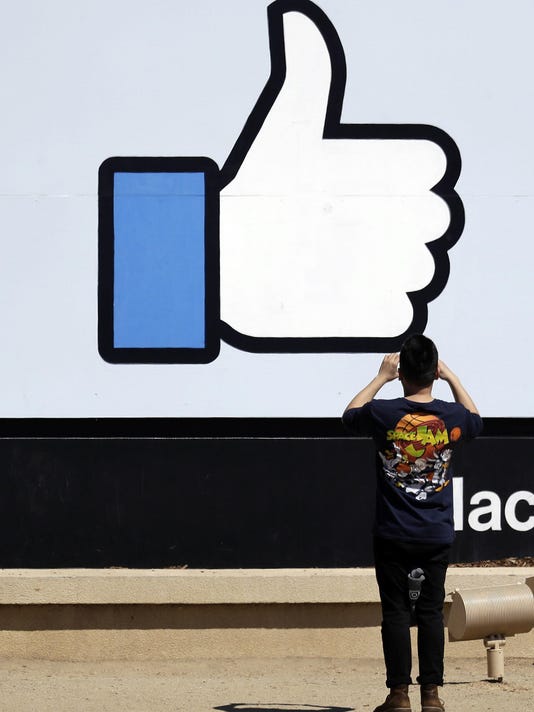 A visitor takes a photo of the Facebook logo at the company's headquarters Wednesday, March 28, 2018, in Menlo Park, Calif. A poll found that Facebook’s popularity plummeted this month after reports that a company working for Donald Trump’s presidential campaign stole private information from millions of the social media company’s users.(Photo: Marcio Jose Sanchez / AP, file)

A poll found that Facebook’s popularity plummeted this month after reports that a company working for Donald Trump’s presidential campaign stole private information from millions of the social media company’s users.

The survey came after Facebook CEO Mark Zuckerberg agreed to testify to Congress about the theft.

Just 30 percent of registered voters had a favorable view of Facebook, according to a survey conducted by Public Policy Polling, compared with 48 percent who do not. (Twenty-two percent of people polled weren’t sure what their opinion of the social media company is.)

The company attracts bipartisan disdain, though is held in lower esteem by Trump voters. Just 29 percent of the president’s supporters in 2016 said they had a positive opinion about Facebook, compared with 53 percent who didn’t. Thirty-four percent of Hillary Clinton supporters, meanwhile, held a positive view Facebook, while 42 percent did not.

The survey was commissioned by Factual Democracy Project, a critic of Facebook and other social media companies. FDP argues that in after the 2016 election, the public should hold the companies to a higher standard about the content that appears on their websites, including whether it popularizes fabricated news and events.

The poll surveyed 577 registered voters and was conducted from March 23 to March 25. It has a margin of error of 4.1 percent.

The New York Times reported that data and tech firm Cambridge Analytica, while working for Trump’s campaign, had “harvested private information from the Facebook profiles of more than 50 million users without their permission.” Facebook had already been under fire from critics, especially from Democrats and progressives who questioned the proliferation of “fake news” on the website during the 2016 election.

The poll found that 71 percent of voters think Zuckerberg should have been required to testify before Congress. It also found that 70 percent of them do not think Facebook can keep their private information safe from corporations or political campaigns that would improperly use it.