At a press conference Thursday in a parking lot in Detroit’s North End, a rare image was on display: two new single-family homes planned for construction in the city.

Last year only 27 permits to were issued to build single-family homes in the 139 square miles of the city. Meanwhile 3,200 houses were demolished, according the Southeast Michigan Conference of Governments.

The 3,200 demolished homes are part of the city’s campaign to eliminate blight. The 27 permits for new homes illustrate Detroit’s long journey to fill the empty land.

The press conference was held to celebrate a housing effort launched by Develop Detroit, a nonprofit that aims to stabilize the city’s housing market beyond the 7.2 square miles of “greater downtown.”

Plenty of new and renovated apartments, condos and historic homes will help fill in that zone. 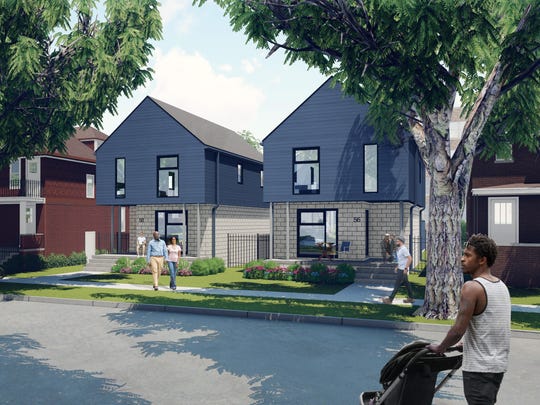 Plans call for building a dozen new homes and rehabbing seven in the North End; and rehabbing 11 in Grandmont-Rosedale. (Photo: Finn Partners)

The remaining sales were land contracts, VA loans and other transactions.

The dearth of new or renovated single-family homes in Detroit “is unprecedented nationally,” said Sonya Mays, president and CEO of Develop Detroit.

The two homes planned by Develop Detroit are part of a goal to build a dozen new residences and rehab seven homes by March in the North End, a neighborhood on the north edge of the gentrifying New Center area.

In the coming year, another 11 existing homes will be rehabbed in the Grandmont-Rosedale neighborhood by Develop Detroit.

The nonprofit aims to stabilize the housing market beyond downtown. (Photo: Finn Partners)

Construction and rehabs are funded by a mix of money from foundations, non-profits and some private investment.

The homes in both neighborhoods will range between 1,200 to nearly 2,000 square feet.

Prices will range from about $150,000 to the low $300,000s. A portion of the residences will be reserved for affordable housing. The investment totals $6.5 million.

Between 2019 and 2021, Develop Detroit has a planned second phase that aims to add another 40 homes in the two neighborhoods.

“The biggest issues is trying to find investment in communities that don’t have the highest marketability right now,” he said.

“You can build single-family (homes) in like Midtown and maybe some areas in the Villages, but in other areas, I think you are going to need efforts like this, a combination of market and philanthropic funding.”