President criticizes Harley-Davidson plans to shift some production out of U.S. in response to EU tariffs 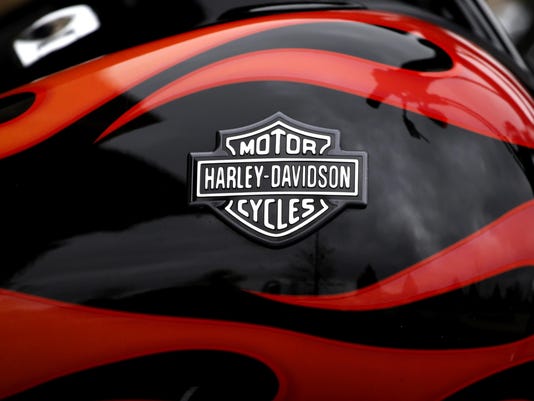 Harley-Davidson Inc. is caught in the middle of conflict between Trump and the European Union.(Photo: Nam Y. Huh / AP)

Not long ago, President Donald Trump pointed to Harley-Davidson Inc. as an example of what was going to go right for manufacturing in America. Now, Harley seems to encapsulate a lot of what’s going wrong.

Citing tariffs tied to escalating tension between Trump and the European Union, the iconic motorcycle maker will further retrench its U.S. operations. Bikes destined for the EU were made less viable by levies that’ll boost costs for the company by about $100 million a year.

“Surprised that Harley-Davidson, of all companies, would be the first to wave the White Flag,” Trump tweeted Monday. The president said he has “fought hard” for the company and said it ultimately won’t have to pay the tariffs, urging it to “be patient!”

Already, Harley had announced plans to close a factory in Missouri and build one in Thailand, after Trump pulled the U.S. out of the Trans-Pacific Partnership, the free-trade agreement with a bloc of Asian countries that would have lowered barriers to key markets. Now, Harley joins iconic American companies including Levi Strauss & Co. and even Germany’s Daimler AG in getting caught in the middle of Trump’s trade skirmishes with major trading partners.

“A company that is as connected to America, and Americana, as Harley is probably going to be laying off U.S. workers in favor of foreign workers and going to be losing money as a result of this,” James Hardiman, an equity analyst with Wedbush Securities, said of the trade battle between the U.S. and the EU. “There’s a lot of irony here, to put it mildly.”

Harley shares fell 6 percent, the biggest drop in almost five months, to close at $41.57. The stock is down 18 percent this year.

The EU’s retaliation to Trump’s steel and aluminum levies will cost about $2,200 per motorcycle shipped to Harley’s second-biggest market in the world, the company estimated in a filing Monday. So it’s shifting production of bikes for European riders to unspecified overseas plants.

The move conflicts with the Trump administration’s touting of the U.S. economy’s strength. “The results of President Trump’s tax cuts can be seen in our Nation’s business environment, as American companies start investing once again,” the White House said in a post that the president’s @POTUS account retweeted to 23.5 million followers.

While Trump has repeatedly claimed that the U.S. can easily win trade wars, victims are starting to pile up at home and abroad. Daimler, the maker of Mercedes-Benz luxury vehicles, warned last week that escalating tension between the U.S. and China will impair earnings from its Alabama sport utility vehicle plant and lower profit this year.

Harley plans to eat much of the cost increase tied to the EU’s tariffs because trying to pass it on to dealers or customers would make an “immediate and lasting detrimental impact” on its business, it said in the filing.

The EU’s levies are only the latest blowback Harley has faced from Trump’s trade policies. A year after Trump pulled the U.S. out of the TPP in January 2017, Harley announced it would close its factory in Kansas City and consolidate production in York, Pennsylvania, eliminating about 260 jobs.

Trump hosted Chief Executive Officer Matt Levatich and other Harley executives and union leaders for a White House listening session in February 2017 and hailed the motorcycle maker as “a true American icon” and “one of the greats.”

“Thank you, Harley-Davidson, for building things in America,” Trump said at the time. “I think you’re going to even expand. I know your business is now doing very well and there’s a lot of spirit right now in the country that you weren’t having so much in the last number of months that you have right now.”

Harley has been dealing with woes independent of Trump’s policies. Levatich has struggled to attract younger buyers in the company’s core home market: U.S. retail sales plunged 12 percent in the first quarter, the 13th decline out of the last 14 quarters. Overseas sales also have been stalling.

The International Association of Machinists and Aerospace Workers, which represents workers at the company’s facilities in Wisconsin, Missouri and Pennsylvania, expressed skepticism that the production shift was needed.

“This latest move is in keeping with Harley’s past decisions to open plants outside of North America,” President Robert Martinez Jr. said in an emailed statement. He called the plan the “latest slap in the face to the loyal, highly skilled work force” that builds the company’s bikes.

Harley already had warned that Trump’s tariffs on imported steel and aluminum will drive up raw materials costs. The EU threatened that its payback for those levies would be to boost taxes on U.S. motorcycles, Levi Strauss & Co. jeans and bourbon whiskey. Paul Ryan, the Republican speaker of the House of Representatives, hails from Harley’s home state of Wisconsin, while Senate Majority Leader Mitch McConnell represents Kentucky, a major maker of bourbon.

“This is further proof of the harm from unilateral tariffs,” AshLee Strong, a Ryan spokeswoman, said Monday. “The best way to help American workers, consumers, and manufacturers is to open new markets for them, not to raise barriers to our own market.”

Harley isn’t yet identifying which international plants will boost output for EU markets. The company operates manufacturing facilities in Brazil, India and Australia, and expects to start operating the new Thailand factory this year.

“We are currently assessing the potential impact on our U.S. facilities,” Michael Pflughoeft, a company spokesman, said in an email. “We are hopeful the U.S. and EU governments will continue to work together to reach an agreement on trade issues and rescind these tariffs.”

Harley forecast $30 million to $45 million in costs linked to the EU tariffs for the remainder of 2018. Analysts project the company will earn about $587 million this year on $5 billion of revenue.

Ramping up output in international plants for the EU may take at least nine to 18 months. While Harley said it’s committed to making motorcycles in the U.S., it suggested it had no other choice but to move production from its home market. The manufacturer sold almost 40,000 bikes in Europe last year, and the continent’s share of total deliveries was the highest for the company since 2011.

“Increasing international production to alleviate the EU tariff burden is not the company’s preference, but represents the only sustainable option to make its motorcycles accessible to customers in the EU and maintain a viable business in Europe,” the company said in its filing.