Traditional enclosed malls are hurting, but those that offer a sense of community are thriving

Sterling Heights — Destiny Philips didn't come to Lakeside Mall to shop. Instead, the 23-year-old teacher from Detroit was taking her young son and daughter to Jeepers, an indoor arcade with rides.

Keyné Conley did have shopping on her mind at the traditional enclosed mall in Sterling Heights. But it was only because the 23-year-old Detroiter needed some last-minute things for vacation, and Amazon's two-day delivery wouldn't arrive in time.

Their experiences illustrate the changing attitudes of Americans toward brick-and-mortar retailers. With growing competition from online shopping, regional malls face possible death — witness the fate of Southfield's Northland Center and Pontiac's Summit Place Mall. Or they must learn to adapt, whether it is attracting a diversity of tenants or ditching the traditional mall concept altogether.

It is a choice Lakeside Mall may need to make as revenue drops, and tenants and shoppers desert the 42-year-old complex. One of its anchor stores, Sears, is liquidating its stock before closing in September. 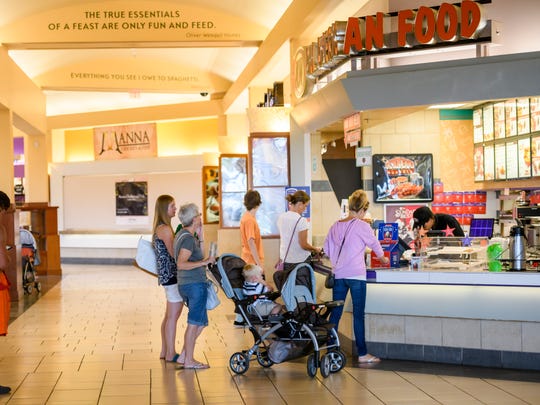 Shoppers line up at the food court inside Lakeside Mall, in Sterling Heights, July 18, 2018. (Photo: David Guralnick, The Detroit News)

Shoppers often drive past Lakeside on their way to the Mall at Partridge Creek. Less than two miles east on Hall Road, it can be tough to find a parking place at the 11-year-old open-air mall in Clinton Township. Customers flock to Partridge Creek for its Main Street feel, popular restaurants and concerts in the outdoor square.

Lakeside Mall employs 2,000 and contributes $2 million in local property taxes. That makes it a top priority for Sterling Heights, City Manager Mark Vanderpool said — so much so that the city commissioned plans to determine the best use of the mall's 150 acres.

One of those concepts would transform the site into a walkable downtown, which Sterling Heights does not have. That plan calls for knocking down the 1.5-million-square-foot mall's walls, except possibly the stores housing Lord & Taylor, Macy's and Sears, and building developments for higher education, housing, offices and retail.

Vanderpool said the city is working with the mall's owner, C-III Asset Management LLC, and its management company, Jones Lang LaSalle Inc., in planning Lakeside's future. Jerry Weller, Lakeside's general manager, said JLL is aware of the city's plans and is working with an architecture firm to create its own design. JLL would not share details.

"Lakeside is a strength for the community, but it could become a weakness for our community if we don’t do anything," Vanderpool said. "No one wants to see a mall close. Failure is not an option."

Credit Suisse predicts up to 25 percent of malls in the United States will shutter in the next five years. That's about 275 locations.

Lakeside's occupancy is hovering around 80 percent. According to a report from commercial real estate data firm Trepp LLC, as leases expire and tenants miss sales thresholds or fall into bankruptcy, new leases are made at lower-than-existing rates and for shorter terms.

"When a landlord is faced with a maturing five-year lease, they are going to get scared," Dalto said. "They don’t want to lose another 10,000 square feet. It looks horrible to go to a mall where every fourth store is vacant." 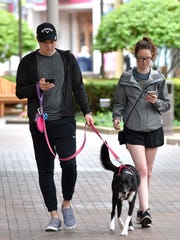 Jaymie Jones, 25, and his girlfriend, Allison Knikelbine, 22, both of Clinton Twp., walk with their two-year-old female Border Collie named, "Bailey," as they shop near the Children's Play Park inside The Mall at Partridge Creek Saturday afternoon. July 21, 2018. (Photo: Todd McInturf, The Detroit News)

Research firm Internet Retailer said e-commerce in the United States represented 13 percent of total retail sales in 2017, up from 11.6 percent in 2016. As a result, retailers have turned to emphasizing in-store experiences to attract shoppers.

"They're doing really well because they've moved away from the old retail shop. It's back to where you come in with your crew, hang out, try on the dresses and drink. Retailers that provide the experiences — they are winning the game."

That is why, Rosenzweig said, malls faced with emptying Carson's, Macy's and Sears are looking outside the usual anchors. Across the country, daycare facilities, fitness centers, hotels, movie theaters, swim schools and trampoline parks have moved into vacant big-box spaces.

In March 2017, Ford Motor Co. moved 2,000 of its employees into a 240,000-square-foot Lord & Taylor vacancy in Dearborn's Fairlane Town Center. Before that, Fairlane's net operating revenue had fallen 27 percent between 2015 and 2016, according to a Trepp report. By October 2017, after Ford moved in, the Starwood Retail Partners mall was beating its previous full-year's operating profit by 15 percent. The men's clothing department at Macy's, Fairlane General Manager Joshua Bruff said, is the second-best performing in the country. 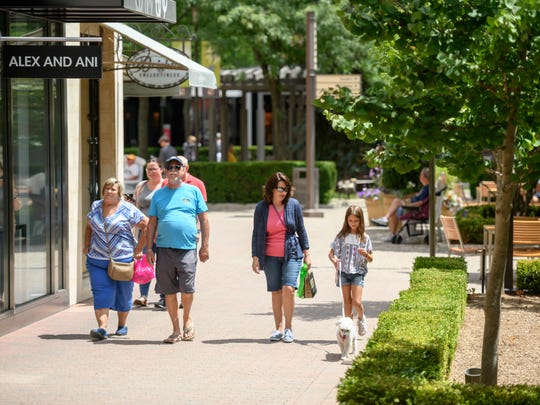 Bruff is a 14-year industry veteran. Despite the gritty outlook for malls, Bruff said it is a "very exciting time" for the business. He and his real estate team are in conversations to fill an outgoing Sears at Fairlane with entertainment, housing or public space.

"It's not only retail. That doesn’t work anymore," Bruff said. "We’re looking at everything that would make sense, not only for shopping, but for Dearborn."

In Southfield, the former site of Northland Center shows the future that Lakeside and Fairlane are looking to avoid. After Macy's and Target left America's oldest mall, Northland closed in April 2015.

Patrons shop on a drizzly Saturday afternoon at The Mall at Partridge Creek. July 21, 2018. (Photo: Todd McInturf, The Detroit News)

Southfield wants to create a mixed-use development in its place, combining assisted-living, housing, offices, research and retail. It is in talks with several possible stakeholders, including San Diego-based Pacific Medical Buildings, which builds and manages real estate for health systems and hospitals, and Bloomfield Hills' Edward Rose & Sons, a luxury residential developer.

"We hope this can be a model for others across the country," said Michael Manion, Southfield's community relations director. "This is a hot real estate market. We're paving the way for redevelopment, doing a lot of the job for them, making it an attractive site."

"It's a downtown area in Macomb County," Partridge Creek General Manager Wendy Batiste-Johnson said. "I believe our customers come to the mall for the full package that can’t be obtained by a click of the button at your home."

Retail expert Dalto agreed: "They've made it a destination. People all the way from Grosse Pointe want to go there. It's a magnet for the east-side middle-class." 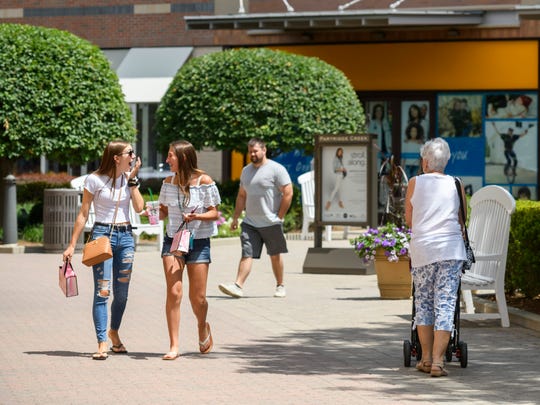 Johnson said in the 11 years of the mall's existence, its sales have increased every year. The mall's net operating income was nearly $13 million in 2016, according to a Trepp report, a 9 percent increase from 2015.

Even with anchor-store Carson's closing this summer, Johnson said she is not worried about filling empty spaces. Last month, Michigan's only Cooper’s Hawk Winery & Restaurant opened in the mall's last available vacancy.

"The intent remains for continued growth at the Mall at Partridge Creek," Johnson said. "We're excited to share those experiences that visitors cannot get anywhere else in Michigan."