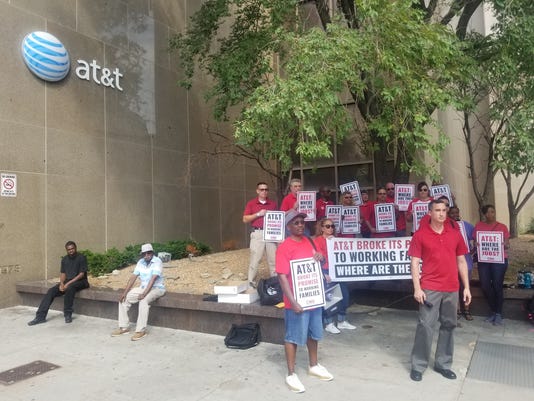 About two dozen communication workers on Monday stood outside an AT&T call center in Detroit to kick off a Midwest tour condemning the company for breaking its job creation “promises” — which AT&T says it never made.

“AT&T, do the right thing,” Communication Workers of America members chanted outside the Michigan Avenue office.

Dubbed the “Broken Promises Tour,” the bus tour is taking union members from Detroit to other cities including Toledo and Columbus on their way to the telecommunication company’s headquarters in Dallas, Texas. They say AT&T is failing to create 7,000 jobs it said it would when corporate tax cuts were implemented in Washington in December. A CWA analysis of the company’s second quarter said AT&T eliminated more than 7,000 jobs nationwide since January and has closed several call centers, including one in Detroit.

“We have not seen the jobs that were promised,” said Linda Hinton, vice president of CWA’s District 4, which includes Michigan. “We came to fight for that at the bargaining table.”

“For months, the CWA has been making inaccurate and misleading statements regarding a non-existent ‘promise’ around tax reform and jobs,” AT&T spokesman Marty Richter said in an email. “Contrary to inaccurate statements by the CWA, AT&T said nothing … promising that the company itself would create any number of jobs.”

Richter said the company has hired 8,000 in the U.S. this year and are hiring thousands more. He said 90 so far are in Michigan.

The CWA is in its fifth month of negotiations with AT&T for 14,000 members in the Midwest. The contract expired in April. Hinton said the union demands additional health-care benefits and wants AT&T to commit to maintaining its workers. Since 2015, she said, the union has lost about 1,500 members in Michigan.

AT&T closed a credit and collections call center at 105 E. Bethune in Detroit’s New Center in March. AT&T's Richter said nearly all of the 114 landline support workers had a job-offer guarantee after it closed and that half remain on the company's payroll.

CWA District 4 Representative Mike Schulte said that was not true. He said the company had 125 employees at the Bethune Street center. Of them, Schulte said 27 still are working there, 11 were relocated and more than 80 were laid off.

Anika Estes, 46, of Detroit is one of 27 employees still working at the Bethune Street location, as AT&T looks to find other jobs for them to fill.

"It has been nonstop; we've been busy, very, very busy," Estes said. “The calls are coming in so rapid that you can barely take a sip of water."

AT&T's Richter said the company is consolidating its workforce in areas where landline use is declining. He said the final offer to the union in May would provide 11 percent compounded wage increases over four years, a “continuation of job security provisions that are virtually unheard of in the U.S.,” and a commitment to hire 1,000 Midwest workers.

Hinton said the union does not want to see any more jobs lost.

“Members voted that the executive leadership could call a strike when and if we deem it necessary,” Hinton said. “For us, it’s about jobs and job security, but they’ve made no commitment.”