$11B worth of Michigan imports face tariffs

Eight percent of the $135 billion worth of goods that are imported through Michigan are facing tariffs that have been implemented or proposed.

$11B worth of Michigan imports face tariffs 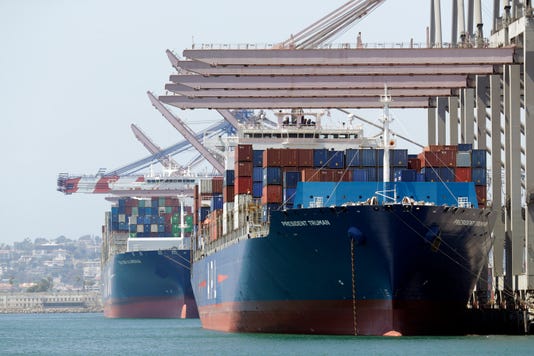 In this Wednesday, Aug. 22, 2018, photo ships are docked at the Port of Long Beach in Long Beach, Calif.(Photo: Marcio Jose Sanchez, AP)

Nearly $11 billion, or 8 percent, of the $135 billion worth of goods imported through Michigan are facing tariffs that have been implemented or proposed by President Donald Trump, according to an Associated Press analysis.

Three percent, or $3.8 billion, worth of the state’s $108 billion export business, including iron and steel, ships and boats and glassware, are also at risk. The biggest impact has already been enforced on aluminum, iron and steel products, affecting nearly $6.6 billion worth or 71 percent of the total volume coming into Michigan's main ports of entry, according to U.S. Census Bureau data from 2017.

That ranks the Detroit customs district, which includes most of Michigan, in the middle nationwide in terms of impact among the nation’s 43 customs districts: in Milwaukee 46 percent of import value could be impacted, in St. Louis 20 percent and in Los Angles 18 percent, according to the AP analysis.

The Detroit district covers 19 ports of entry statewide, including the Ambassador Bridge, Detroit Metropolitan Airport and the Blue Water Bridge in Port Huron.

Michigan’s iron and steel exports already have seen tariffs on 68 percent of its $2.8 billion business. The state’s $1 billion glass industry could see proposed tariffs impact 31 percent of that yearly volume.

Although the tariff impact hasn’t been huge yet, economist Patrick Anderson said the uncertainty could be dramatic for Michigan, one of the most important international trade states in the country.

Anderson, CEO of East Lansing-based Anderson Economic Group, has already heard of contracts being renegotiated and disputes between companies over who should pay the tariffs.

The tariffs have "already sent small shock waves through the auto industry,” he said in an interview. “It could be a fraction of what could happen in the next five years. … The potential is for the damage to grow.”

The Associated Press analyzed government data and found that from the West Coast to the Great Lakes and the Gulf of Mexico, at least 10 percent of imports at many ports could face new tariffs if the president's proposals take full effect.

Since March, the U.S. has applied new tariffs of up to 25 percent on nearly $85 billion worth of steel and aluminum and various Chinese products, mostly goods used in manufacturing. The Trump administration is also now investigating the possibility of placing tariffs on imported cars under a section of federal law that allows the president to do so if a national security threat is deemed to exist.

“Tariffs are working big time,” Trump wrote in a recent tweet. He has argued that the tariffs will help protect American workers and force U.S. trading partners to change rules that the president insists are unfair to the United States.

Most of the tariffs planned affecting Michigan agriculture have already come into effect, according to the AP data. Commodities such as dairy products, pork and beans have seen 25 percent tariffs on goods from countries such as Canada, China and Mexico.

Dave Williams, a farmer and president of the Michigan Soybean Association, said most of Michigan’s soybeans go to Canada and other states for processing, but China is the U.S. soybean industry’s No. 1 buyer. As a result, soybean farmers have seen market prices drop from around $10 to $8.

Many soybean farmers have forward contracts for their beans and are able to sell them. Once farmers begin looking to sell their harvest in mid-September to mid-October, Williams said, they would feel the effects.

“They might be disappointed,” he said. “We’re hoping Canada will jump on board with Mexico and that that will solidify the NAFTA portion of the trade disagreement before then.”

The dry bean industry has not been so fortunate, said Jamie Zmitko-Somers, international marketing program manager at the Michigan Department of Agriculture & Rural Development. Tariffs from the European Union have led Italy to cut contracts with navy bean suppliers in Michigan.

Dairy and pork farmers are feeling the effects now, too, said Ernie Birchmeier, a livestock and dairy specialist at the Michigan Farm Bureau. Positive forecasts for a dairy industry that has been in a slump for the past four years are now gone, and farmers have had to dump gallons of milk because of oversupply.

“We appreciate the administration tackling this tough issue,” Birchmeier said. “It’s imperative that we have the ability to have free and fair trade around the world, but export sales are down because of this.”

Somers said the agriculture department is planning a trip to China in September to help companies connect with buyers there. Although some companies are looking to expand and open new markets there, other have had to adjust their plans. A distilled spirits company will no longer showcase its whiskey because of a 25 percent tariff, instead highlighting its gin, which is duty-free. Another company pulled out of the trip entirely.

“They were concerned about the ability to be effective and make sales even though their product didn’t have a tariff on it,” Somers said. “The time wasn’t right with everything that is going on.”

Kristin Dziczek, vice president of the Industry, Labor and Economics Group at the Center for Automotive Research, said the impact of tariffs on steel and aluminum are already being felt by the auto industry, but she said the industry's long lead time for product design has insulated some of the effects.

"Prices are up, about $100 per car," she said. "A lot of automakers have long term supply contracts, so the impact is not hitting us yet."

The Trump administration's consideration of placing tariffs on imported vehicles is a much bigger dagger hanging over the auto industry, Dziczek said, adding that $46 billion worth of steel and aluminum is imported annually into the U.S., compared to $353 billion worth of cars.

"The order of magnitude is large now that they're considering tariffs on autos and parts," she said.

Complicating matters further for both the auto and agricultural sectors, the future of the North American Free Trade Agreement is also uncertain. The Trump administration has reached a preliminary agreement with Mexico that would increase the percentage of an auto’s parts that have to come from the U.S. or Mexico to cross the border duty free to 75 percent from 62.5 percent.

Dziczek said most cars are compliant with current NAFTA rules, but she said some automakers may struggle to meet the higher threshold.

"Big automakers I think are going to largely be able to comply," she said. Companies producing small vehicles in Mexico for sale in the U.S. might have some trouble meeting the new requirements however, which would make them subject to a 2.5 percent tariff.

"They'll have to bring their content up to NAFTA rules, which is costly, or pay the 2.5-percent tariff  or just stop bringing the cars up to the U.S.," she said. "Will people in the U.S. cry if they don't have the Nissan Sentra? Those are the decisions automakers will be making once they understand what's been negotiated."