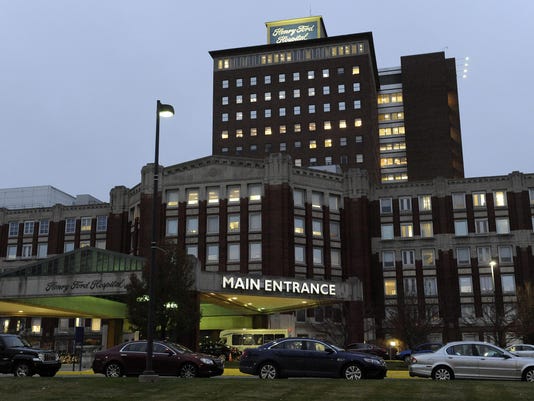 As a result of a partnership between Wayne State University and Henry Ford Healthy system, Henry Ford Hospital in Detroit would become the primary institutional affiliate for the university, medical nursing and pharmacy and health sciences schools.(Photo: David Coates / Detroit News file)

A Detroit-based health system and Wayne State University said Friday they have signed a letter of intent to expand their partnership.

The non-binding agreement between the Henry Ford Health System and the university marks the first steps in designating Henry Ford the primary institutional affiliate for the university's medical, nursing and pharmacy, and health sciences schools, according to a news release. It also would integrate the organizations' education, research and patient care resources to enhance the curriculum for aspiring medical professionals and provide innovations in health care.

"As we look to the future of patient care and the desire to make a long-standing impact on the health and wellness of our community," Henry Ford CEO Wright Lassiter III said in a statement, "we believe that we can better achieve these goals through a transformative partnership than we could as institutions working independently."

The announcement follows news on Monday that Wayne State signed a five-year partnership with the Detroit Medical Center. More than 300 physicians with the Wayne State University Physicians Group will provide select adult medical services at the DMC's seven hospitals and other facilities. That deal came after both institutions said they intended on ending their partnership in the spring, which could have sparked major shifts for the region's health care industry, but later agreed to keep negotiating.

Expressions of unanimous support for the partnership between both governing boards comes after many months of talks. Henry Ford and Wayne State now will work out the details of a definitive agreement, which they hope to present in early 2019.

The deal would create a joint Health Sciences Center focused on improving the health of diverse and vulnerable populations in Detroit and the Midwest through collaboration on clinical, research and educational activities. The program would have a separate operating and governance structure, including a president, board, budget and governing committee.

Both organizations declined to comment on the deal at this time.

"With Henry Ford, we have a partner who shares our mission to change medicine as we know it while infusing energy and talent into the community," M. Roy Wilson, the university's president, said in a statement. "We believe we are creating something special here."