Madewell will make its Detroit debut Tuesday morning as the latest merchant to open its doors downtown.(Photo: David Guralnick, The Detroit News)Buy Photo

Detroit — A crew at the new Madewell store in downtown Detroit put the finishing touches on the brand's latest location Monday, stacking the signature denim jeans and putting decor in place.

Madewell will make its Detroit debut Tuesday morning as the latest merchant to open its doors downtown. The store at 1426 Woodward sits next to the much anticipated 130-room Shinola Hotel development scheduled to open in December.

The women's clothing store carries denim jeans, tops, knits, dresses and accessories. The store features the brand's latest collection for the opening, with new items — including layering pieces and boots — expected to arrive in a couple of weeks in preparation for the cold weather months.

The store will also feature goods from local artists as part of its Hometown Heroes program.

"We're very excited to open Madewell's first location in Detroit on Woodward Avenue," said Joyce Lee, the company's head designer. "For the first time, our customers can shop with us in-person in the heart of the city, and discover art and specialty pieces from some of our favorite Detroit creatives who will be stocked in store as part of our Hometown Heroes program.” 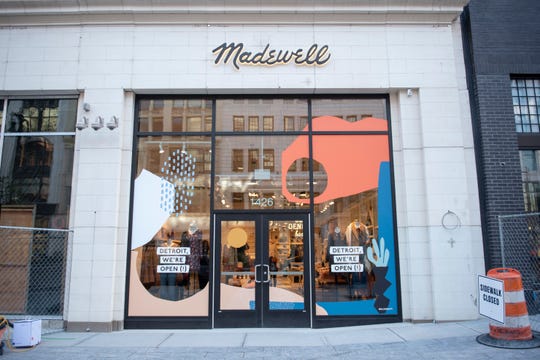 Madewell was announced among the first retailers opening at or near the Shinola Hotel earlier this month. (Photo: David Guralnick, The Detroit News)

When Madewell was announced among the first retailers opening at or near the Shinola Hotel earlier this month, Jennifer Skiba, vice president of leasing for Bedrock Detroit, said the store fit in well "given today's casual lifestyle."

The latest opening will be the 124th store for the New York City-based company. Other Michigan locations are in Ann Arbor and at the Somerset Collection in Troy.

The local merchants that will have an ongoing presence in the store are Detroit-based companies Tait Design Co. and Salt Textile Studio and Ypsilanti-based Worthwhile Paper. 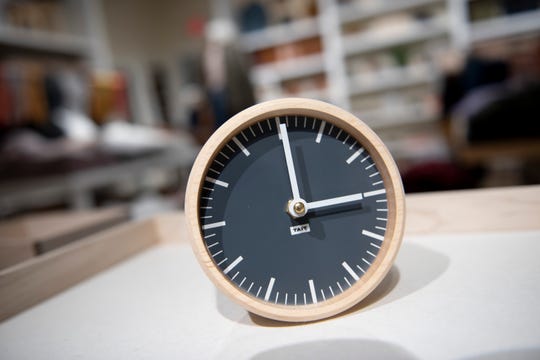 A desk clock made by Tait Design Co. for sale at the women's clothing store Madewell in Detroit. (Photo: David Guralnick, The Detroit News)

Tait said his company will sell perpetual calendars made of solid maple and desk clocks.

Rutt will participate in a pop-up to sell her goods during the store's launch party on Tuesday evening. Other locals who will join her with pop up merchandise are Jeff Mullin of Tied Home, Nina Cho and Little House Studio Co.

The public is invited to attend the Madewell Detroit Launch Party 6-8 p.m. Tuesday. Local vendors will include Gather, Sister Pie and Cason Waters. The event will also feature craft cocktails by Sfumato made with local liquors by Norden Aquavit and Detroit City Distillery.

Ten percent of the proceeds from the opening event will benefit Living Arts, an arts education nonprofit for Detroit youth.