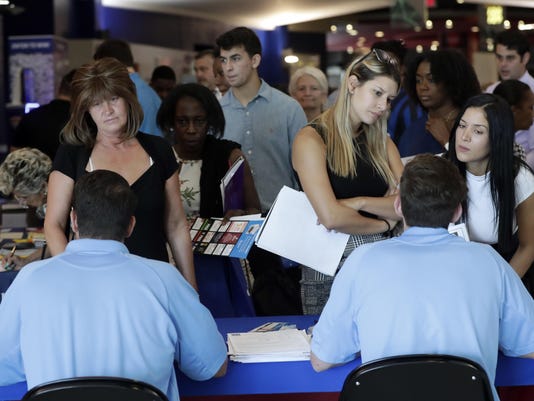 U.S. companies added 227,000 jobs in October, according to a private survey, a healthy gain that suggests companies are still finding workers to hire even as the unemployment rate has fallen to a 49-year low.(Photo: Lynne Sladky / AP)

Washington – U.S. companies added 227,000 jobs in October, according to a private survey, a healthy gain that suggests businesses can still find workers even with the unemployment rate striking 49-year lows.

Payroll processor ADP said that employers added jobs in manufacturing, retail, and professional services such as engineering. October’s hiring was the strongest in eight months.

The report Wednesday comes two days before the publication of the government’s jobs report. Economists believe that the Labor Department numbers will show employers added 190,000 jobs. ADP’s report doesn’t include government employment and frequently diverges from the official figures, however.

The two reports also respond differently to hurricanes. ADP’s figures were mostly unaffected by Hurricane Michael, which struck Florida last month, because its report counts someone as employed even if they miss work due to bad weather.

The government’s jobs data, however, counts someone as employed only if they were paid during the period when the government conducted its jobs survey. That could lower the government’s employment count when it’s released Friday.

The unemployment rate fell to 3.7 percent in September, the lowest level since 1969. Businesses are staffing up at a rapid pace in response to healthy consumer spending and strong economic growth.

That’s forcing more companies to raise pay to attract and keep workers. A separate report Wednesday showed that wages and salaries for private-sector workers rose 3.1 percent from a year earlier. That was the strongest annual gain in more than a decade.

A measure of compensation that includes benefits and covers all workers, including government employees, rose 2.8 percent in the third quarter from a year earlier, the Labor Department report said.

Americans boosted their spending by the most in nearly four years in the July-September quarter. The economy expanded 3.5 percent, though most economists forecast growth will fall below 3 percent in the final three months of this year.