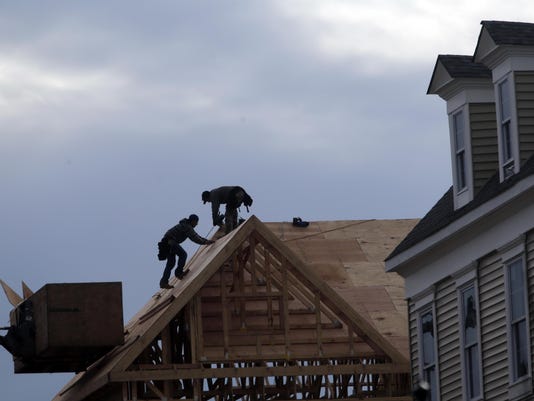 In this Feb. 26, 2018, file photo construction workers work on a new townhouse in Wood-Ridge, N.J. Americans’ path to homeownership is likely to get more expensive this year, even as a severe shortage of homes for sale shows signs of easing.(Photo: Seth Wenig / AP, file)

Americans’ path to homeownership is likely to get more expensive this year, even as a severe shortage of homes for sale shows signs of easing.

Mortgage rates, which climbed through much of last year, will continue to rise in 2019, driving up homebuyers’ borrowing costs and shutting others out of the market entirely. The projected result: a cooling housing market and falling home sales nationally.

“On the whole, it’s going to be more expensive for buyers next year, despite the fact that they’ll have more options,” said Danielle Hale, chief economist at Realtor.com.

The U.S housing market stalled in 2018 after a long period during which price increases outpaced income growth. That had been offset by historically low mortgage rates, until rates began rising steadily a year ago.

While still low by historical standards, the average rate on a 30-year home loan was 4.55 percent last week, according to mortgage buyer Freddie Mac. That’s up from 3.99 percent a year earlier.

Realtor.com and Redfin forecast the rate on a 30-year, fixed-rate mortgage will rise to 5.5 percent by the end of 2019. Zillow expects rates will reach 5.8 percent. That would be rates’ highest level since the last recession.

A mere extra half percentage point can boost monthly payments and add tens of thousands of dollars in interest over the life of the typical 30-year loan.

“Rising mortgage rates will take a bite out of affordability on top of an already supply- constrained and high-priced housing market,” Trulia senior economist Cheryl Young wrote in her forecast.

As mortgage rates increase, so does the pressure on would-be buyers to lock in a rate and close a deal.

Nate Vogel, a homebuyer in the Denver suburb of Lafayette, has felt some of that pressure after about a year looking for a home without success.

Because of the limited number of homes for sale, especially under $500,000, the software engineering manager recently decided to look at homes at the top of his budget, $650,000.

But that could be a problem if mortgage rates continue climbing.

“If that interest rate goes up another percent, that would make things much more uncomfortable,” said Vogel, 37. “At this point, no matter what house I buy, I’m sure the interest rate will probably be higher and the payment will be more.”

Higher mortgage rates have already started dampening home sales. As of November, sales of previously occupied U.S. homes were down 7 percent from a year earlier, the steepest decline since May 2011, when the housing market had yet to bounce back from the bust.

Realtor.com predicts U.S. home sales will fall another 2 percent in 2019.

It’s not all bad news for would-be buyers, though. Economists project home prices will rise more slowly in 2019. Zillow’s forecast calls for prices to increase nationally by about 3.8 percent. Realtor.com has them rising at just 2.2 percent.

Another plus for buyers: The number of homes on the market is expected to continue rising, albeit from historic low levels. The inventory of U.S. homes for sale was up 4.2 percent as of November to 1.74 million units.

Copyright 2019 The Associated Press. All rights reserved. This material may not be published, broadcast, rewritten or redistributed.