The Dearborn-based workwear brand is not just popular among trades workers, but has found its way into the mainstream. 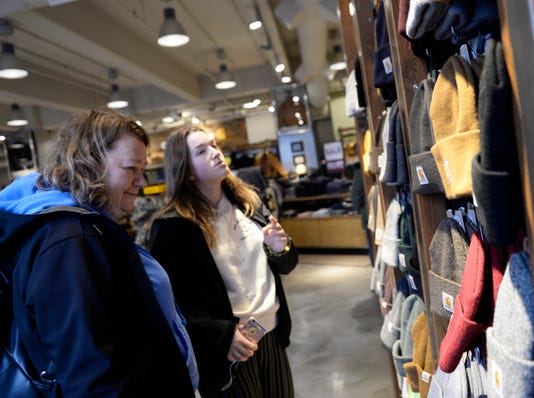 Nina Miernecki, left, of Toronto and her 16-year-old daughter, Moyra Kontsalakis, check out the display of watch caps at the Carhartt store in midtown Detroit.(Photo: Clarence Tabb Jr., Detroit News)

Detroit — Moyra Aontsalakis walked into the flagship Carhartt store on Cass in Midtown and made a beeline for the wall of beanies.

"A lot of my friends like Carhartt," said the 16-year-old from Toronto, who was in town for an indoor softball tournament and wanted to visit the retail location because it offered more color options than stores near home. "It's really popular in Toronto among skaters. It's not too much, and I like it, too."

Aontsalakis picked up a red A18 acrylic watch cap for a friend. She was not alone — Amazon.com recently said the Dearborn-based workwear manufacturer was one of its top brands this holiday season with more than a million items ordered.

The nearly 130-year-old family-owned company that began making durable clothing for railroad workers now is no longer a niche clothing manufacturer. Its brand is mainstream among the likes of Daniel Day-Lewis, Rihanna, Harry Styles and Kanye West. It's a trend stemming from skaters and hip-hop culture that was years in the making.

"A lot of work and a lot of time and effort have been put into the brand for years," said Tony Ambroza, Carhartt's chief brand officer. "In 2010 and 2011, there was the beginnings of a trend around workwear. If it is, it's been a long trend in its development."

Ambroza said the company grew 20 percent in 2018, and traffic increased in its 29 retail stores and online by nearly 30 percent. Google searches and impressions increased 92 percent, and the number of people talking about Carhartt on social media platforms exploded, increasing more than 200 percent.

Sal Rodriguez, 41, of St. Clair Shores grew up with the brand. His father and grandfather wore Carhartt when they worked on the railroads.

"It's been a long time since I've had this stuff," said Rodriguez, who came to the Carhartt store to try on the Sawtooth Parka. "Now it's a fad."

More than 100 years after Hamilton Carhartt began to manufacturer overalls in brown duck fabric and denim with only four sewing machines and five employees in a small Detroit loft, Carhartt has grown popular.

In 1990, when the jackets started becoming popular on the streets, Tommy Boy Records, a hip-hop label, bought 800 Carhartt jackets embroidered with its logo and distributed them as a promotional stunt. It signed House of Pain, who wore the Weathered Duck Detroit coat in the music video "Jump Around," contributing to the ubiquity of the brand.

Carhartt also benefited from some European glamour. Swiss jeans designer Edwin Faeh in 1989 bet on workwear when he introduced his own line of American-inspired products to the European market.

Five years later, he made a licensing agreement with Carhartt to launch Carhartt Work in Progress, or WIP, to become the exclusive distributor of the brand in Europe. It has more than 80 stores worldwide.

Still based in Amsterdam, WIP has similar products from the original Carhartt and pairs them with different materials and trims. It opened a U.S. store in New York City in 2010, and its products are available on its website. Carhartt WIP is not available on Amazon.

"With the Carhartt label, we were making products for a person that would be doing the roughest and toughest jobs," Ambroza said. "WIP celebrates the workers that make art and film. Both are creative and are a part of the overall system of people we are committed to serving and protecting."

"Consumers are looking to be inspired," Corrigan said in an email. "Mass no longer appeals to them in a market where exclusivity is key. They love seeing their favorite brands come together to collaborate on something new and fresh."

There is minimal consumer crossover between the brands, Ambroza said, but the division has boosted Carhartt's name recognition, popularity and relevance.

Around 2010, a new breed of Brooklyn hipsters began sporting a look some called "lumbersexual" featuring Carhartt beanies and coats.

The company opened its Detroit store in a former auto dealership in 2015 and now is the only Michigan store among 29 in 17 states, as its following among urban tastemakers has grown.

It's a consumer base beyond its core business of blue-collar workers that Carhartt has welcomed. The company has grown its offerings for women since introducing its first line for them in 1998 and for the past four seasons, it has introduced around 30 new styles on average to its line.

Its core products — bib overalls and the 1975-introduced heavy-duty hooded jacket dubbed the "Active Jac" — continue to be top sellers along with its Workwear Pocket T-shirt that made its debut in 1992. 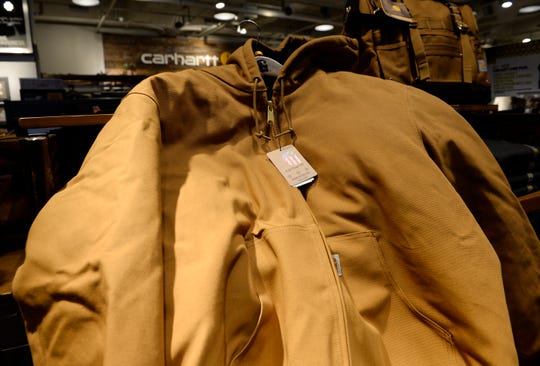 The J140 Active Jac coat was a big seller for Carhartt during the holiday season. (Photo: Clarence Tabb Jr., The Detroit News)

The Carhartt watch cap, relatively unchanged since 1987, has been the top product by unit sold from the company for the past few years, Ambroza said. The beanie retails around $10.

As trends could be turning toward workwear from athleisure, Carhartt is helping push the move. It recently introduced Force Utility Knit Leggings, the company's rugged version of yoga pants for women, and its Full Swing Cryder Jacket, which allows for greater movement than some of its other coats. Both are top sellers.

Kevin Cartwright, 43, of Detroit stepped into the Carhartt store recently, almost his entire outfit purchased from the company. The welding-class instructor at the Randolph Career Technical Center had purchased his wife, a health coach, a pair of the leggings for the holiday.

Retail analyst Corrigan said demand for nostalgic fashion grows, which is good for the success of heritage brands like Carhartt, attracting a handful of new retailers lately. But the brand continues to evolve with new product arrivals up 76 percent year-over-year through Nov. 1, she said.

"Even while appealing to a new generation," Corrigan said, "Carhartt has managed to remain true to the workwear roots its consumers fell in love with in the first place."