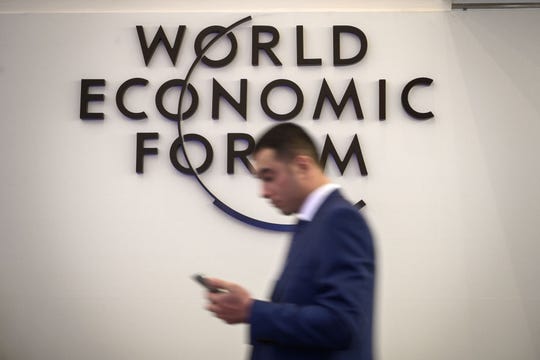 A man walks past a sign of the World Economic Forum (WEF) ahead of the WEF annual meeting at the Congress Centre on January 21, 2019 in Davos, eastern Switzerland. (Photo: FABRICE COFFRINI, AFP/Getty Images)

Davos, Switzerland – A survey of hundreds of corporate leaders shows “a record jump in pessimism” about the world economy, with sentiment doused by trade spats, a global downturn and fading benefits from U.S. President Donald Trump’s tax cuts.

Consulting firm PwC says the latest edition of its annual survey of CEOs found 30 percent feel growth will decline this year, a six-fold increase from a year earlier — when 57 percent were optimistic.

The survey, released Monday on the eve of the World Economic Forum opening in Davos, Switzerland, tallies responses from more than 1,300 CEOs worldwide and is billed as a good predictor of economic results.

In an interview, PwC Chairman Bob Moritz said: “There’s a not-surprising increase in the amount of pessimism from the CEOs and the global economy as they look at the next 12 months.”

He said “confidence is waning” amid rising trade tensions and protectionism.

Thirty-five percent of CEOs cited the perennial concern about over-regulation as the top threat to their businesses. But “policy uncertainty” — a new metric introduced this year — came a close second, the survey found.

The survey of CEOs in 91 territories was conducted online, in person and by phone in September and October.

The souring mood was perhaps most pronounced about the United States: The survey found a 41-percentage point drop in CEOs choosing the U.S. as a top market for growth, and optimism among North American executives dropped the most sharply — from 63 percent to 37 percent.

Moritz suggested that the U.S. dominance in world affairs isn’t what it once was, noting how the center of gravity of capital markets had been the U.S. over nearly the last half-century. “Now you’ve got it shifting a little bit more east” to China and other parts of Asia, he said.

The Trump administration’s salvos over trade with China and other key trading partners have taken a bite: PwC found that 98 percent of U.S. CEOs and nine in ten Chinese counterparts voiced concerns about the U.S.-China trade issues.

Moritz also pointed to uncertainty’s about Brexit, saying simply: “You never know where these things are going to go.”