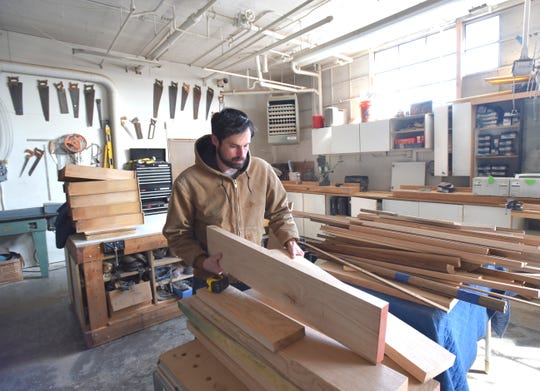 Ponyride co-founder Phil Cooley prepares to measure some lumber to build a table for a customer in the Ponyride wood shop. After selling the Corktown building that houses the business incubator for $3.3 million, Ponyride will soon move to 5203 Loraine St. near Grand River in the Core City neighborhood. (Photo: Todd McInturf, The Detroit News)

Detroit — Ponyride, the small-business incubator that's helped foster dozens of entrepreneurs and artists, has sold its Corktown building for $3.3 million and will keep the nonprofit going in the nearby Core City neighborhood.

The current Ponyride building at 1401 Vermont was purchased by local developer Marc Nassif who plans to renovate the 30,000-square-foot building and charge market rents for the space, said Phil Cooley. Cooley co-founded the Ponyride organization. 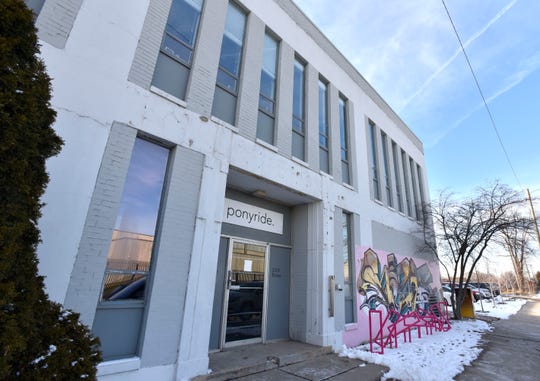 Entrance to the Ponyride building in Detroit's historic Corktown neighborhood. Ponyride is moving from Corktown to the Core City neighborhood. (Photo: Todd McInturf, The Detroit News)

In 2011, Cooley bought the current Ponyride building in a bank foreclosure for $100,000. He and his wife Kate Bordine, another co-founder, put in hundreds of hours to fix up the building. The idea of the nonprofit is to offer low-cost rent to enable artists, budding entrepreneurs and others a chance to develop their ideas.  Some have graduated and moved into commercial retail spaces, such as Detroit Denim.  A current tenant, Anthology Coffee, is about to move into a space in the Eastern Market area.

More than 60 current Ponyride tenants will move to the Core City location at 5203 Loraine,  Cooley said. 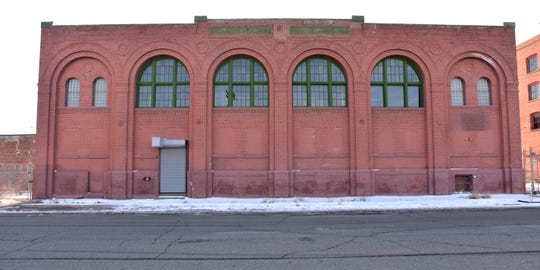 This is the future Ponyride location at 5203 Loraine St. near Grand River in Detroit's Core City neighborhood. (Photo: Todd McInturf, The Detroit News)

The nonprofit has garnered local and national acclaim. In 2014, the performer Madonna visited Ponyride during a tour of various Detroit nonprofits. In 2015, legendary filmmaker Werner Herzog made a short film featuring Ponyride and Cooley.

Despite the acclaim, the sale was necessary because Cooley said he was still in about $100,000 debt. 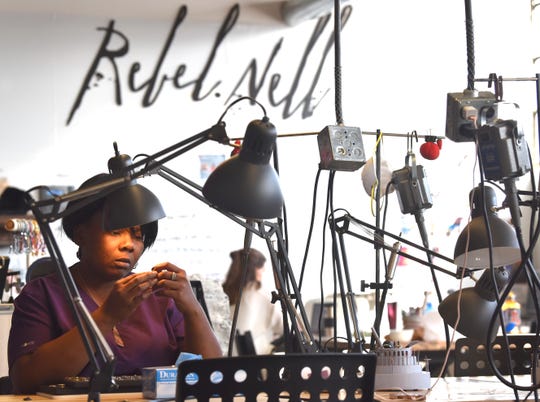 Rebel Nell employee Alicia Preyer of Detroit quality-checks jewelry she recently made in the Rebel Nell studio inside the Ponyride building in Corktown. Rebel Nell jewelry is made from graffiti that has fallen off Detroit buildings. (Photo: Todd McInturf, The Detroit News)

"The building still needs work and the only way to pay for it was to eventually start charging market-rate rents," he said.

The move to the Core City building begins in the coming weeks. He added the nonprofit is still deciding whether the Loraine Street location will be temporary or permanent.