Sales of mattresses purchased online have gone from virtually nothing to nearly 20% of percent of the U.S. market 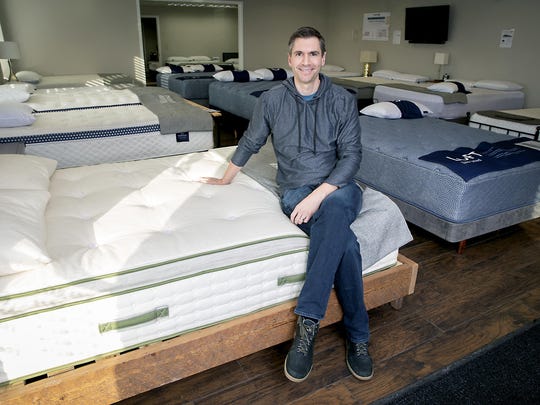 The number of Americans who shop online for mattresses — one of the most personal and expensive possessions in a home — continues to grow and reshape the business of selling them.

In the past three years, sales of mattresses purchased online bounced from virtually nothing to nearly 20 percent of the U.S. market. Consumer Reports is marking the shift with its March issue, in which most of the mattresses reviewed are brands chiefly sold online.

The fortunes of two retailers illustrate the change.

Ben Trapskin three years ago opened Sleep Sherpa in Edina, Minn., as a showroom for mattress brands that are mainly sold online. Last year, he opened a second store in Chicago, and he’s considering a new one on the east side of the Twin Cities.

Meanwhile, Dave Smittkamp of Mattress Liquidators in West St. Paul has decided to quit the retail mattress business after 30 years. “The internet has made our job a lot tougher,” he said. “With free delivery and free returns for 100 days for online mattresses, what does a customer have to lose?”

Kenny Larson, president of Slumberland, based in Little Canada, said the online-based retailers have succeeded in changing purchase habits on mattresses away from try-it-before-you-buy-it.

“What’s changed isn’t the foam mattress,” Larson said, referring to the mattress style that online-based sellers chiefly offer. “Those have been around for years. It’s the way consumers want to get the product; either pick it up from the store or order it online and have it delivered.”

And yet, the rate of growth for online-based mattress makers has slowed down and some of the best-funded of them have started forging deals with retailers or even creating their own outlets.

“Online retailers such as Casper, Warby Parker and even Amazon have discovered that to grow the market, they need to appeal to both online and store shoppers,” said Brian Yarbrough, an analyst at Edward Jones.

Casper announced last year that it plans to open 200 stores in three years. It also has a distribution agreement with Target. In January, Nectar announced plans to be in 250 Mattress Warehouse stores on the East Coast.

Entrepreneurs such as Trapskin of Sleep Sherpa are pushing a new model that’s more educational than self-promotional. And it’s working. “We broke even in 2017 and we were definitely profitable in 2018,” Trapskin said. “We saw sales increases of 50 percent last year in the store and 30 percent on Sleepsherpa.com.”

He started his business after blogging about the pros and cons of mattresses he tried. Eventually, companies started sending him mattresses to test, so Trapskin wondered if other consumers would want to try several mattresses in a showroom without having to order and possibly return them.

Sherry Bloom of Medina has bought several mattresses for her residence and vacation home in the past few years. She remembers the moment when she realized that buying a mattress at Sleep Sherpa was different.

“We told the salesman that we kind of liked this one mattress and he said, ‘You may also want to try this one over here. It’s cheaper,’ ” she said. “The whole process seemed more honest. The salesman wasn’t pushy at all.”

In the recent past, most customers would place mattress orders online with the mattress-maker, which would ship it directly to the customer. Now Trapskin is keeping some reserve stock of the most popular sellers so customers can grab and go.

Since Trapskin opened Sleep Sherpa, a retailer in New York City has opened a similar business with even bigger plans to expand. Roy Yosef started SleePare six months ago to help customers become more educated about getting a good night’s sleep. “We are both educating consumers on a product that can involve a lot of research,” Yosef said.

Retail analysts expect more fallout among the 200 online mattress sites and 9,000 store locations as the market shifts. Last year, Mattress Firm announced plans to close up to 700 of its 3,200 stores.

At Mattress Liquidators, Smittkamp sells overstocks and scratch-and-dent queen mattresses for $300 to $600. He even sells one online brand, Saatva. A queen-size Saatva mattress costs $500 to $600 in his store, down from their online price of $1,100 to $1,300.