Oscar winner said in speech the company was "saving Detroit." 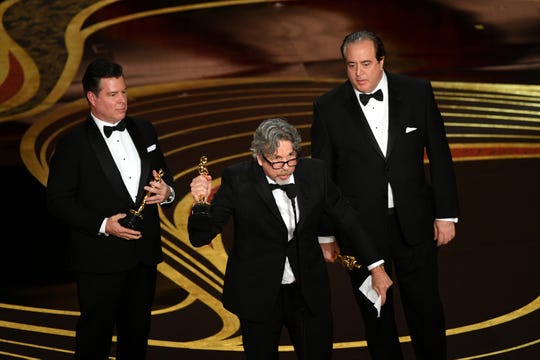 Detroit — Shinola Detroit LLC, the homegrown luxury watch, bicycle and leather goods maker, was praised Sunday night at the Oscars by a movie director, but not everyone joined the chorus.

Based in Detroit and founded in 2011, Shinola has stores in Detroit, Los Angeles, London, Washington, D.C., and other major cities. Its manufacturing arm is based in the College for Creative Studies in Midtown and its marketing campaign touts the company's Detroit roots.

More: Shinola's not 'saving Detroit' by itself, Detroiters say

Shinola officials responded Monday morning in a tweet by saying the company wouldn't exist without Detroit.

"We'd like to congratulate Peter Farrelly on his Oscar win for Best Original Screenplay and Best Picture," the tweet said. "Peter has been a friend for years and the Shinola shout-out was completely unplanned and unexpected. While we are so thankful for the love we did want to make it clear that without the city of Detroit, there would be no Shinola. The city gave our brand life and it's something we will never take for granted."

However, many on social media, including U.S. Rep. Rashida Tlaib, D-Detroit, blasted or mocked Farrelly's words.

Say what? Please stop with this disrespectful & hurtful narrative that we 1) need saving & 2) that billionaires are the ones to do it.

We just need the 1% to stop taking our land for nothing + shifting our tax dollars towards for-profit development that makes them richer. https://t.co/6pWYVCutI1

Many others were also clear about how they felt about Farrelly's remarks.

Sick of hearing that BS.

I am from Michigan. I promise you: Shinola watches are not saving detroit.

Me standing on 7 mile waiting to be saved by Shinola pic.twitter.com/09Bm18uywC

The comment that Shinola saved Detroit is an insult to the citizens who stayed & belived in this city through the good times, bad times, & the worst of times. These are the real heroes that saved Detroit, not Shinola. https://t.co/LMgA6gDTlx