Top U.S. CEOs report that their economic outlook weakened in the first three months of the year although it remains above its historical average 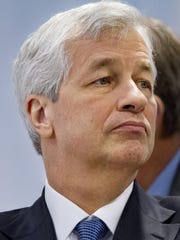 Washington – Top U.S. CEOs reported Wednesday that their economic outlook weakened in the first three months of the year although it remains above its historical average.

The group’s economic outlook index for the January-March quarter fell to 95.2, down from 104.4 in the fourth quarter of 2018. The lower reading, however, far exceeded the index’s historical average of 82.4 for the ninth straight quarter.

A slowdown in manufacturing and retail, sluggish housing and construction activity and global pressures, including an ongoing trade war with China, have dampened expectations for economic growth.

Still, experts say, the economy remains on strong ground as its expansion – the second-longest on record – continues.

The economy, as measured by the gross domestic product, grew 2.9 percent last year, the fastest pace since 2015.

In the new survey, 80 percent of the CEOs said it was “somewhat” or “very” important for Congress to craft and enact a national data privacy law.

As public concerns have risen over scandals and aggressive use of personal data at companies like Facebook, Amazon and Google, European regulators have slapped huge penalties on U.S. tech companies. California is putting in a tough measure, set to take effect next year, that will let the state’s consumers request the data collected from them and opt out of future collection.

The tech industry is pushing for what it sees as the lesser of the evils: a new federal privacy law that would be less stringent than California’s and take national precedence over it.

“This crazy patchwork quilt of different privacy regulations … is a big impediment to business and to innovation,” Josh Bolten, a former White House chief of staff who is president of the CEOs’ organization, said in a conference call with reporters.

The organization is proposing legislation that would establish a basic standard for users’ individual privacy rights and give businesses a common set of rules, Bolten said.

Jamie Dimon, CEO of JPMorgan Chase and chairman of the group, said the plans for capital spending and hiring shown in the survey remain strong, “a sign of continued confidence in the American economy amid easing global growth forecasts.”

Congress and the Trump administration need to enact policies to expand free and fair trade, invest in infrastructure and employee training, and “fix our broken immigration system,” Dimon said.