The Fed announced that it was keeping its benchmark rate in a range of 2.25 percent to 2.5 percent 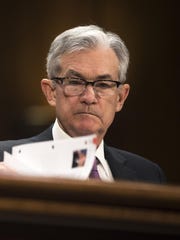 The central bank’s theme Wednesday, in its statement and in a news conference by Chairman Jerome Powell, is that it will remain continually “patient” about pursuing any further rate hikes. In his news conference, Powell used some version of the word “patient” no fewer than 10 times. (Photo: Kevin Wolf / AP)

Washington – The Federal Reserve left its key interest rate unchanged Wednesday and projected no rate hikes this year, reflecting a dimmer view of the economy as growth weakens in the United States and abroad.

The Fed said it was keeping its benchmark rate – which can influence everything from mortgages to credit cards to home equity lines of credit – in a range of 2.25 percent to 2.5 percent. It also announced that by September, it will no longer reduce its bond portfolio, a change intended to help keep long-term loan rates down.

Combined, the moves signal no major increases in borrowing rates for consumers and businesses. And together with the Fed’s dimmer forecast for growth this year – 2.1 percent, down from a previous projection of 2.3 percent – the statement it issued after its latest policy meeting suggests it’s grown more concerned about the economy. What’s more, with inflation remaining mild, the Fed feels no pressure to tighten credit.

In signaling no rate increases for 2019, the Fed’s policymakers reduced their forecast from two that were previously predicted in December. They now project one rate hike in 2020 and none in 2021. The Fed had raised rates four times last year and a total of nine times since 2015.

The central bank’s theme Wednesday, in its statement and in a news conference by Chairman Jerome Powell, is that it will remain continually “patient” about pursuing any further rate hikes. In his news conference, Powell used some version of the word “patient” no fewer than 10 times.

Stock market indexes initially rallied on the news, but the gains soon faded and many stocks finished the day down. The Dow Jones Industrial Average lost 141 points, or 0.5 percent. Analysts said the Fed’s downgraded outlook for the economy might have alarmed investors.

The Fed’s decision Wednesday was approved on an 11-0 vote.

Still, stock prices have been generally surging since early January, when Powell abruptly reversed course and made clear that the Fed was in no hurry to raise rates and would likely slow the runoff from its balance sheet.

And while stocks struggled Wednesday, the Fed’s plans for no credit tightening this year sent Treasury yields tumbling, with the 10-year yield touching its lowest level in more than a year. The yield reached 2.53 percent, down from 2.61 percent late Tuesday and 3.2 percent late last year.

The Fed’s policymakers have clearly settled on the belief that more than a decade after they cut their benchmark rate to a record low near zero – and kept it there for seven years – that rate has now reached what’s called “neutral”: neither stimulating nor restraining economic growth.

The central bank’s pause in credit tightening is a response, in part, to slowdowns in the U.S. and global economies. It says that while the job market remains strong, “growth of economic activity has slowed from its solid rate in the fourth quarter.”

Some Fed watchers have said they think the next rate move could be a cut later this year if the economy slows as much as some fear it might. But at his news conference, Powell played down that prospect.

“It is a great time for us to be patient and to watch and wait,” Powell said, invoking the theme he has sounded in recent months.

In its statement, the Fed laid out a plan for stemming the reduction of its balance sheet: In May, it will slow its monthly reductions in Treasurys from $30 billion to $15 billion and end the runoff altogether in September. Starting in October, the Fed will shift its runoff of mortgage bonds into Treasurys so its overall balance sheet won’t drop further.

The Fed had aggressively bought mortgage and Treasury bonds after the 2008 financial crisis to help cut borrowing rates, spur lending and stimulate growth. With the economy now much stronger, the Fed has been gradually shrinking its bond portfolio. But now it’s prepared to slow and then stop that process to avoid putting upward pressure on loan rates.

The central bank’s new embrace of patience and flexibility reflects its response since the start of the year to slow growth at home and abroad, a nervous stock market and persistently mild inflation. The Fed executed an abrupt pivot when it met in January by signaling that it no longer expected to raise rates anytime soon.

The shift toward a more hands-off Fed and away from a policy of steadily tightening credit suggests that the policymakers recognize that they went too far after they met in December. At that meeting, the Fed approved a fourth rate hike for 2018 and projected two additional rate increases in 2019. Powell also said he thought the balance sheet reduction would be on “automatic pilot.”

That message spooked investors, who worried about the prospect of steadily higher borrowing rates for consumers and businesses and perhaps a further economic slowdown. The stock market had begun falling in early October and then accelerated after the Fed’s December meeting.

President Donald Trump, injecting himself not for the first time into the Fed’s ostensibly independent deliberations, made clear he wasn’t happy, calling the December rate hike wrong-headed. Reports emerged that Trump was even contemplating trying to fire Powell, who had been his hand-picked choice to lead the Fed.

But after the December turmoil, the Fed in January began sending a more comforting message. At an economic conference soon after New Year’s, Powell stressed that the Fed would be “flexible” and “patient” in raising rates.