Detroit — The owner of the Russell Street Deli in Eastern Market issued a 1,895-word account Thursday of his issues with his new landlord and his decision to close.

The landlord responded with a paragraph.

The bottom line remains unchanged: the popular restaurant will close Sept. 28, and as Russell Street's Ben Hall told The Detroit News Wednesday, six finalists have emerged from a buffet line of offers for new locations and partnerships.

Hall said that all six spots are in Detroit or Hamtramck, and that the outpouring of invitations, free legal advice and other support has been both uplifting and surprising. 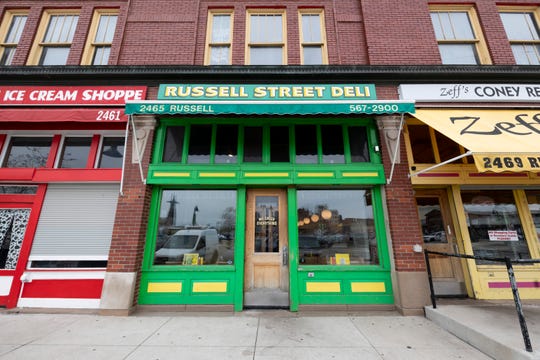 "We didn't really know who we were," he said, in terms of popularity and impact. "We only have 1,200 Instagram followers."

What might be described as his manifesto, posted on Facebook, detailed Hall's side of his interactions with Sanford Nelson of FIRM Real Estate, one of several connected companies that have purchased at least 20 buildings in Eastern Market since 2017.

Their dispute centers around a damaged floor that Nelson says will cost $50,000 to repair. He says it's the responsibility of Hall, 45, who started at Russell Street as a dishwasher in 1996 and bought the restaurant in 2007.

Hall disagrees. "It’s hard enough to make a sandwich," he wrote, "without some guy’s hand deep in your pocket."

The company countered that "we tried to solve this amicably from the very beginning, but the owner of has made it clear that he is determined to close despite offers from many sources, including FIRM Real Estate. We’re sorry to hear he is leaving his current location and wish he and his team the best of luck in the future."

Hall, who lives in Hamtramck, said the Russell Street Deli name will not travel to the new location, and chances are the soups-and-sandwiches format won't, either.

Depending on which offer he takes and which format the new restaurant adopts, he said, the opening could be as quick as October or as distant as mid- to late 2020.

"A lot has to do with the readiness of the space we go to," Hall said.

Russell Street Deli has been an Eastern Market mainstay for 30 years. Its building at Russell and East Fisher Freeway, which also houses Supino Pizzeria, Zeff's Coney Island and three recently vacated storefronts, was purchased eight months ago by a group of investors led by Sanford Nelson and his father, Linden.

Hall is paying $1,700 per month in rent on a lease that runs through March 2021, with an option for five more years.

The Eastern Market Corp., the nonprofit that runs the iconic conglomeration of shops, restaurants, food processors and year-round farmers markets, had tried to broker a deal between tenant and landlord.

Hall also operates a packaged soup company that sells eight varieties to 150 markets in Michigan. A new contract is adding 60 Whole Foods stores in the Midwest to the client base, he said, and four new soups are undergoing testing for proper labeling.

The soups are produced in the commercial kitchen at Avalon Bakehouse Outlet on Detroit's east side. The new order is large enough that his workforce can expand from four or five employees to 10 or 11, Hall said, but many of his 22 employees would rather work in a restaurant.

Hall said his workers average 7½ years at the deli and $16.50 an hour in salary. He met with several of them Wednesday to discuss possible concepts for the new restaurant.

Kitchen manager Derrick Bonds lobbied for barbecue, he said. Hall's wife, Arielle Laws, has made a case for handmade pasta.

Whatever approach wins, Hall said, he'll probably have to do "a damned Kickstarter to raise some cash."