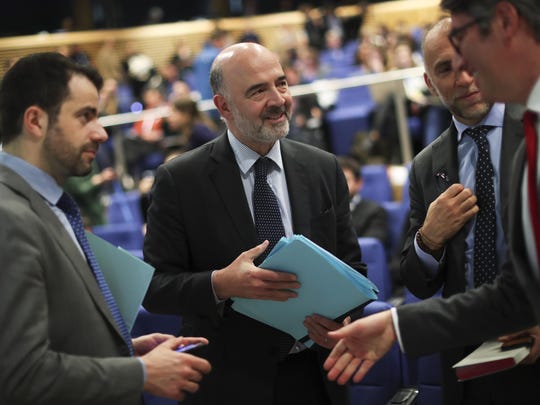 European Commissioner for Economic and Financial Affairs Pierre Moscovici, center, holds his papers before a news conference following a College of Commissioners meeting at the European Commission headquarters in Brussels, Tuesday, May 7, 2019. (Photo: Francisco Seco / AP)

Frankfurt, Germany – The European Union’s executive commission has trimmed its forecast for eurozone economic growth this year and next as uncertainty over trade conflicts and weakness in the auto industry hold back output.

The commission lowered its outlook for growth this year in the 19 countries that use the euro to 1.2 percent from 1.3 percent in its previous forecast in February. The estimate for next year was trimmed to 1.5 percent from 1.6 percent.

The commission said that domestic demand alone was keeping Europe’s economic upswing going in its seventh year, thanks to a strong job market, muted inflation and low borrowing costs.

Europe’s economy depends heavily on trade and has felt the effects from slowing global commerce and the trade dispute between the U.S. and China. Auto companies are struggling with tougher emissions regulations in the U.S. and China, and with trade disputes and uncertainty. Germany’s BMW on Tuesday reported an operating loss for its automotive business, while Daimler earlier reported lower profits.

The economy faces risks from “possible policy mistakes,” said Pierre Moscovici, the European commissioner for economic and financial affairs, taxation and customs, at a news conference in Brussels.

He said that there was “a worrying amount of uncertainty” about the outcome of trade talks. U.S. President Donald Trump is threatening to add more tariffs on Chinese goods as soon as this Friday barring a trade deal. Europe trades with both and would be sideswiped by a trade war that leads to higher import taxes and less business being done.